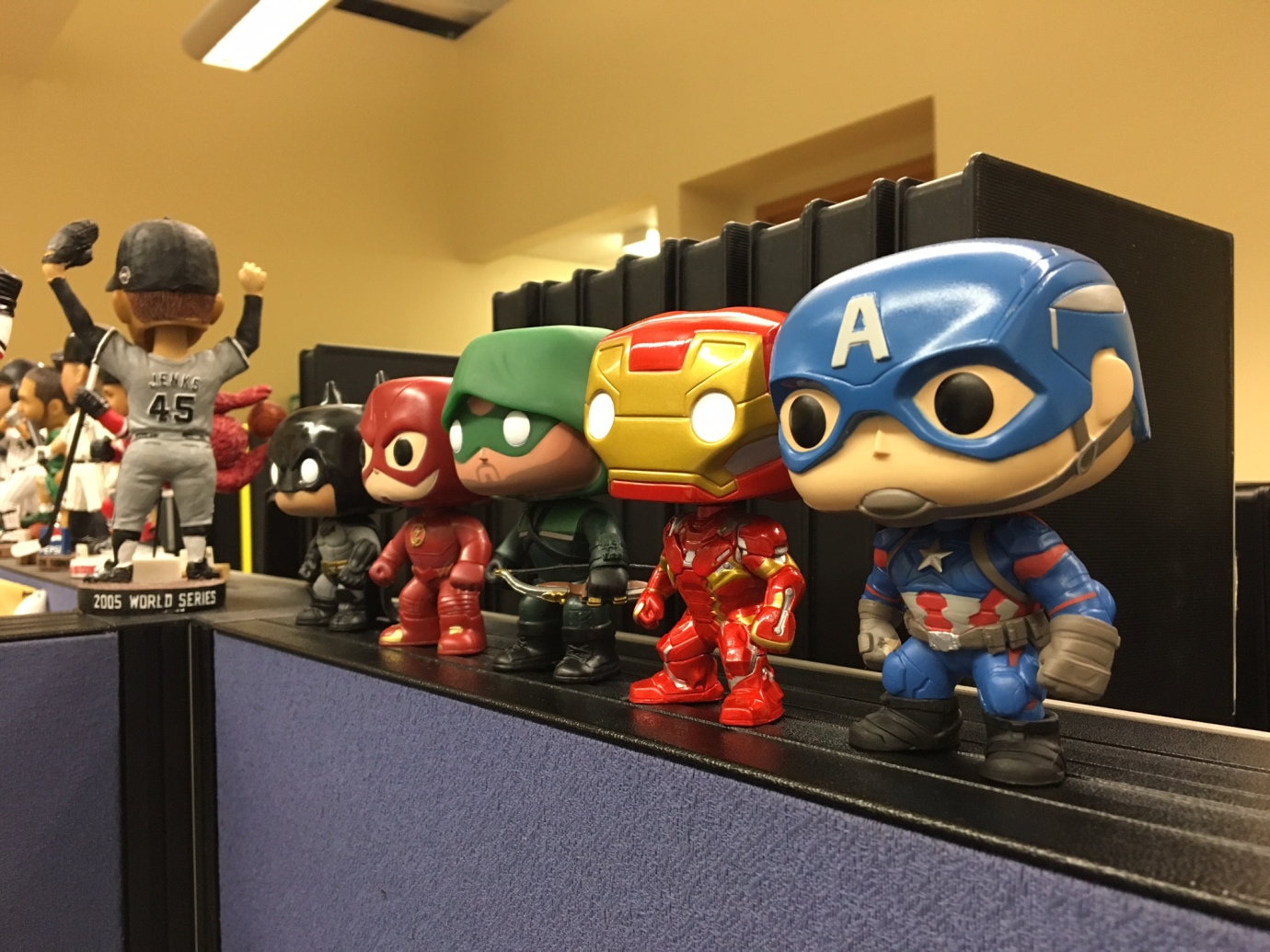 After a nice long break, the Piffcast is back! It’s been a month, so Mike and TJ had some catching up to do…

Listen as we take you on a “wild ride” of Game of Thrones reactions, Lord of the Rings comparisons, Ghostbusters needing better NBA Finals promotion, TJ’s men’s fashion rants, wedding registries, the Saved By the Bell pop-up diner in Chicago, other TV or movie restaurants we would like to try, and then some…

We also take a moment to discuss Muhammad Ali and the tributes to his life, career and impact over the weekend following his passing. Simply The Greatest.

After a nice nod to the original four scientists who “saved New York” 30 years ago, we finally meet the new Ghostbusters.

At last, we have footage of Melissa McCarthy, Kristen Wiig, Kate McKinnon and Leslie Jones kicking ass in the jumpsuits…and ghosts doing nasty slimy things to them.

Your first thought may be, “who fits which roles from the original?” That seems easy with Abby Yates (McCarthy) filling in as Dan Aykroyd’s “Ray”, as he was considered the glue of the group. The rest seem to be their own characters though, with traits of the original Ghostbusters. Erin Gilbert (Wiig) is a physicist with Egon’s demeanor and some of Venkman’s humor. Jillian Holtzman (McKinnon) is the engineer, like Egon was, but also seems a bit quieter with a mix of Venkman’s and even Groot from Guardians of the Galaxy’s personality…meaning she’ll land some solid punchlines.

You can try to peg Patty Tolan (Jones) as Winston, but really it’s Leslie Jones being “Badass MF’n” Leslie Jones…slapping the silly out of everyone.

The new Ghostbusters, directed by Paul Feig (Spy, Bridesmaids) will be in theaters July 15th, 2016.

“Graphic Commando Unit” Vanilla Lab created a series of “mashup” designs with NBA logos and classic cartoons. The design firm is based in Barcelona and get a lot of their inspiration from “magazines, posters, album covers and skateboard decks.”

Seeing that we all love our sports and nostalgia, this seemed perfect to share. If they or anyone could combine MLB logos and Hanna-Barbera characters, I would be eternally grateful.

Apparently they didn’t get the memo in Barcelona about the team’s move to Memphis, even though both Gasol brothers (from Spain) played there.

Cleveland Cavaliers/Masters of The Universe

I like the throwback to the Supersonics. Need to get a team back in that city.

One of the biggest cliches regarding Hollywood and film is that “original material is dead”. To the people who feel that way, I would recommend going to their nearest theater and checking out Room and Bridge of Spies. We do seem to receive news on a daily basis of an upcoming reboot or sequel to a classic that’s either been long overdue or way too late.

Some of these projects are exciting and give us something to look forward to. Others just make you shake your head and ask…”Why?”

A remake to a film or franchise can be refreshing. Most of us are Shawshanked (naturally forced to sit and watch the rest of the way through, no matter the time) whenever Ocean’s Eleven comes on TV, the George Clooney version and not the 1960 Frank Sinatra one. Did you see the Footloose remake though? Neither did I.

There are a number of reboots and sequels coming to theaters in the next year or so. Many of the original titles are decades old. I’ll here to separate what’s worth the hype and what’s not.

(Movies To Look Forward To)

Although the original was released 15 years before this sequel hits theaters, it still works because the two stars NEVER AGE. Seriously, whatever moisturizer these guys are using makes 15 years look like 5.

…and they’re killing off Bieber, so at least the movie has that going for it. Just avoid anything the Anchorman did. Seriously.

Aside from jerks who lack imagination, everyone is looking forward to this film and rightfully so. The build up and marketing for Episode VII has been remarkably. While it’s been over 30 years since Han Solo was unfrozen from carbonite on the screen, chills ran down my spine hearing him say “…we’re home”, alongside a Chewbacca roar.

Returning to a set that isn’t so dependent on CGI and green screen like Episodes I-III has audiences excited. It’s also fun for both new and old generations of fans to see new characters on new adventures with old ones.

I, like many, was left with a really bad taste in my mouth after Spider-Man 3. It bothered me so much that I didn’t even see the Andrew Garfield version until I happened upon it on FX like a month ago…and I still didn’t feel like I missed out.

Now that Spider-Man is home in the Marvel Cinematic Universe, my spidey senses are tingling again (yeah, I said it). We’ll get our first look at the reboot edition in the highly anticipated Captain America: Civil Waras he chooses a side between Steve Rogers and Tony Stark. This means we won’t have to go through ANOTHER origin radioactive spider bite story when Peter Parker gets his solo film in 2017. We also know he’ll be in high school played by an actor who is actually in the appropriate age-range, Tom Holland. Tobey Maguire and Garfield were both in their very late twenties when they played high school Peter Parker.

It will be fun to see how the new Spider-Man fits into the Marvel/Avengers story going forward and who he will face off with. Hopefully NOT the Green Goblin for a 3rd time. 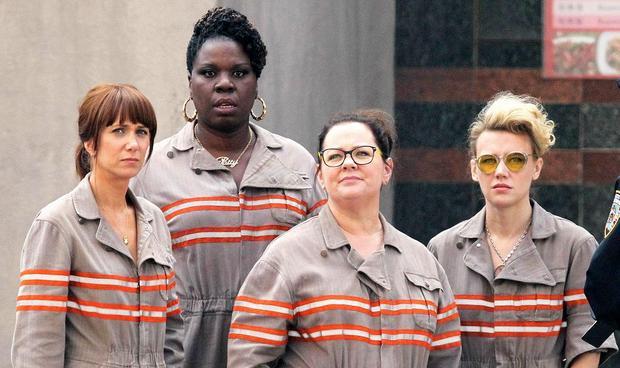 I really don’t get why the idea of this film is so controversial. It’s an expansion of the Ghostbusters universe and features a female dominant cast with Kristen Wiig, Melissa McCarthy and current SNL cast members Kate McKinnon and Leslie Jones. Bridesmaids director/Freaks and Geeks writer Paul Feig is teaming up with Parks and Recreation for what’s meant to be a series of new Ghostbusters films that Bill Murray, Dan Aykroyd and Ernie Hudson have not only signed off on, but plan to appear in as well.

Also, Chris Hemsworth is their receptionist, so…there’s that.

(Movies Nobody Asked For)

AMBI Pictures, run by Andrea Iervolino and Monika Bacardi, announced this week that they will be financing a remake of Christopher Nolan’s breakout film, Momento. In the statement breaking the news, Bacardi said:

“Memento is a masterpiece that leaves audiences guessing not just throughout the film, but long after as well, which is a testament to its daring approach.”

Then leave the damn thing alone! Better yet, just rerelease it theaters because it only made $25 million initially and was regarded as a modern classic right after. You can’t tell me though that anyone was asking for a new take or reimagining of this story.

I’m convinced there is an evil group of film backers who want to remake Patrick Swayze’s whole filmography and in the worst ways possible. This is Exhibit A.

I understand there are different “extreme sports” being portrayed (snowboarding instead of surfing), but you could simply call the movie something else and change the character names to make it more appealing…Ya know, like The Fast and the Furious or something like that.

“Fear causes hesitation, and hesitation will cause your worst fears to come true…”, like a remake to this movie with worse actors. 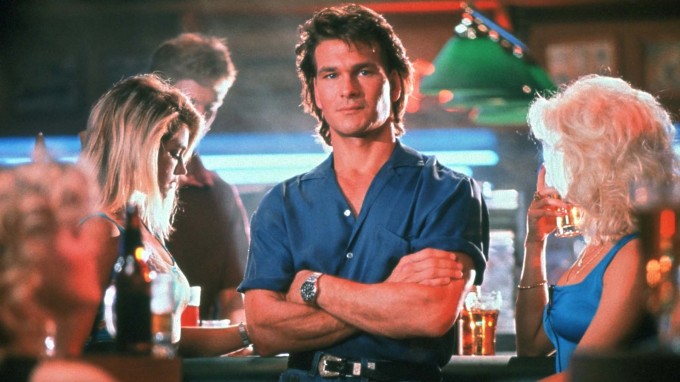 All we know about this movie is that Ronda Rousey has been casted to play Swayze’s character. A columnist for GQ, Jack Moore (who LOVES this idea), says this should work because “Ronda Rousey could end up being the new Patrick Swayze!”

Okay, I’m back from throwing up.

I’m not an MMA fan so I don’t share the adoration for Rousey as many people do. I also didn’t see The Entourage movie and don’t feel like I’m missing out. I have seen the other films she’s appeared in and don’t really want to again. I know that she’s the one thing that UFC has to promote itself and that she wants to join WWE. And like I said regarding the new Point Break, you can make the “Rousey as a bouncer” movie and not call it ‘Road House’. Rousey herself doesn’t sound all that confident about doing the film after telling reporters, “The worst thing that’s going to happen is, is that I’ll really suck and just disgrace the name of Swayze and ‘Road House,’ and everyone will hate me.”

I need this photo to have Maverick giving a thumbs down.

The original is almost 30 years old. Yeah, Tom Cruise is in fantastic shape and still kicking ass in the Mission Impossible franchise and Jack Reacher, but you’re not going to bring either Goose or Tony Scott back to get me excited for this sequel. There’s also a lot of confusion as to whether Cruise will even accept the offer to play Maverick again…Val Kilmer’s already editing his Facebook statuses about it, so it will probably go straight to DVD or VOD.

Will Smith isn’t signed up for this film so neither am I. Seriously, you could air it on SyFy after the next Sharknado and it will get as much hype as it would going to theaters.

(Sidenote: Not included is the long rumored Space Jam 2. Personally, I don’t mind if kids today get to see one featuring LeBron James because many of them weren’t even born while Michael Jordan was playing basketball. Just let that sink in…)

Any other reboots and sequels that interest you or make you sick? Let me know on Facebook or Twitter. 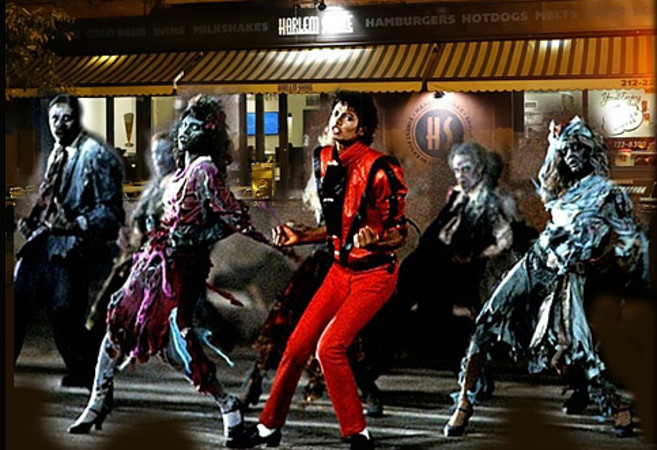 Bringing back the Mixtape specifically for your Halloween weekend. Also, how awesome is it that Halloween is on a Saturday this year?

This list is a culmination of scary, sexy, and all the things you want playing in your ears while rocking terrorizing the neighborhood.

12. “Sympathy For the Devil” – Rolling Stones

14. “Nightmare on My Street” – DJ Jazzy Jeff and the Fresh Prince

26. “Halloween on the Barbary Coast” – The Flaming Lips

Here’s the whole Playlist on Spotify!

This morning, there were only four.

There was one thing left to do…

“You either die a hero, or live long enough to see yourself become the villain.”

The Dark Knight is your 2015 Movie Madness Champion

One Shining Moment, anyone?

(Someday I’ll splice together an epic supercut for this)

Tomorrow we will have a full breakdown of the road to Cinematic Bracket Supremacy at MichaelPiff.com. Thank you everyone for playing! 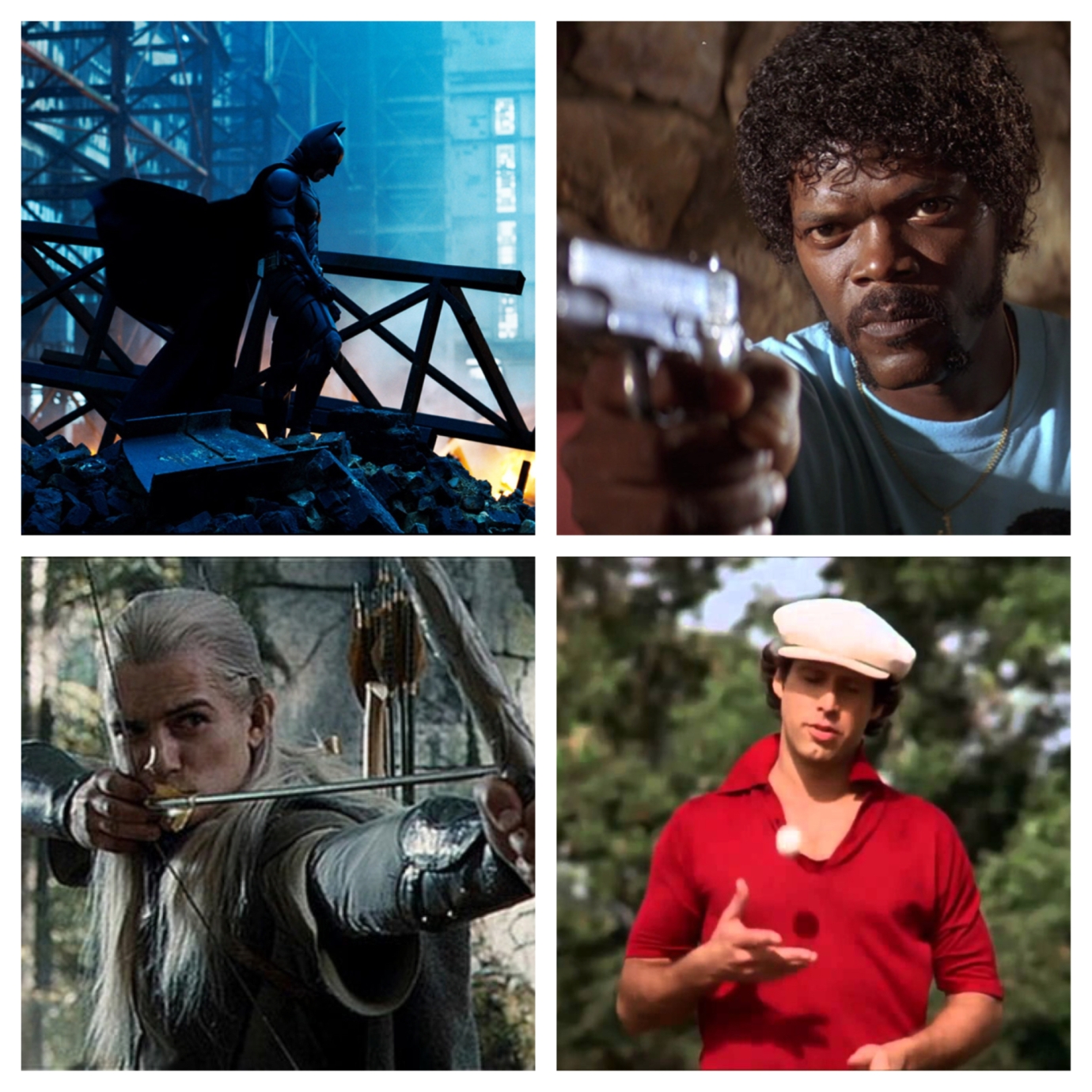 You read that right….

We have our Final Four!

The Final Four voting will start tomorrow at 8 AM CT and the Championship will follow at 2 PM on MichaelPiff.com 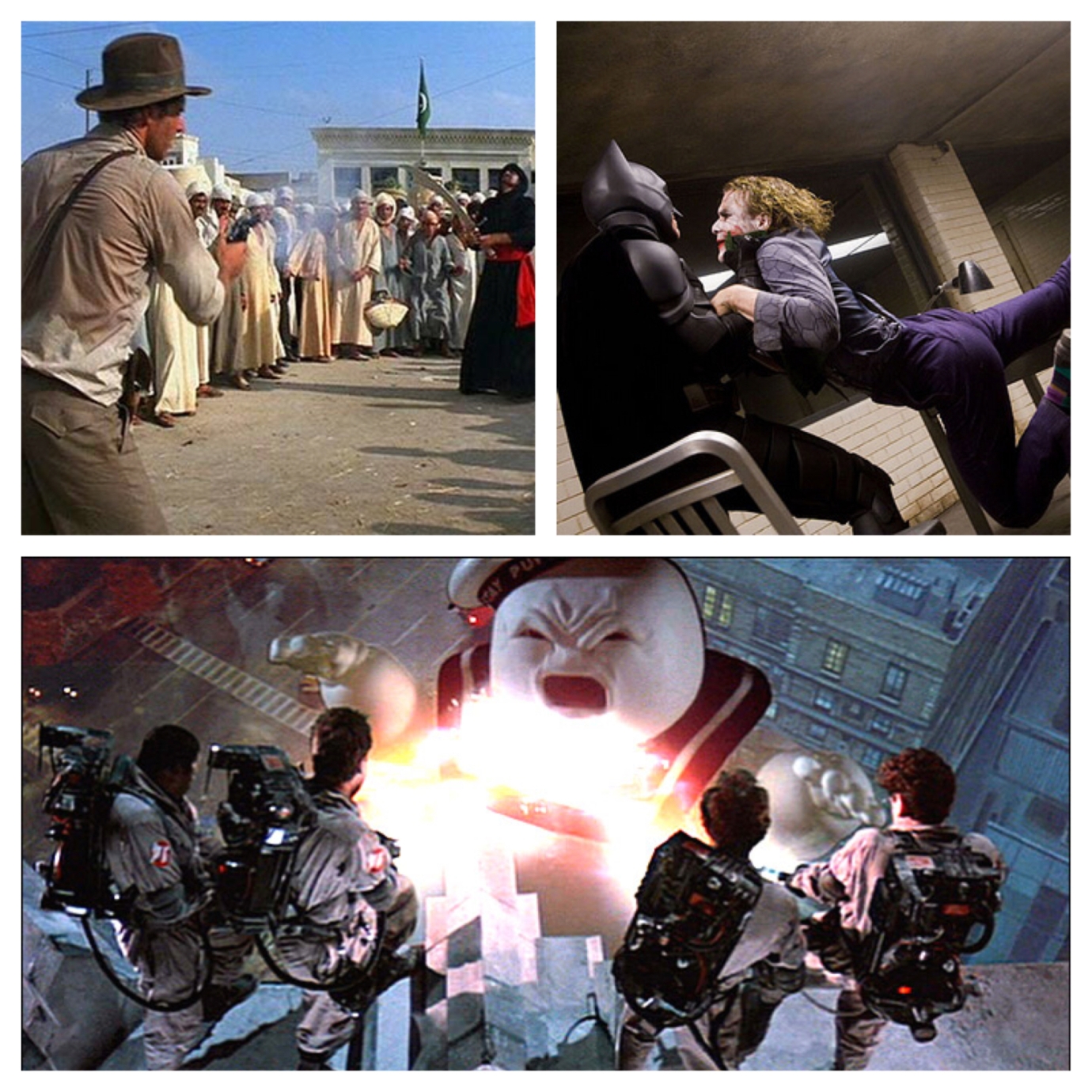 Heck of a weekend, huh?

And while we took a breather from the Madness (off the court) yesterday, the matchups only get tougher now…

[Update]: Closing has closed. Winners are below.

(2) Raiders of the Lost Ark

Elite Eight voting will begin tomorrow at 12:30 PM at MichaelPiff.com

Welcome to the next round…

[Update]: Voting has closed. The winners are below and have advanced to the Sweet 16. Voting will resume again Monday morning, March 30th on MichaelPiff.com

(5) Guardians of the Galaxy

AGAIN, VOTING WILL RESUME FOR THE SWEET 16 TOMORROW MORNING. THANKS FOR PLAYING.