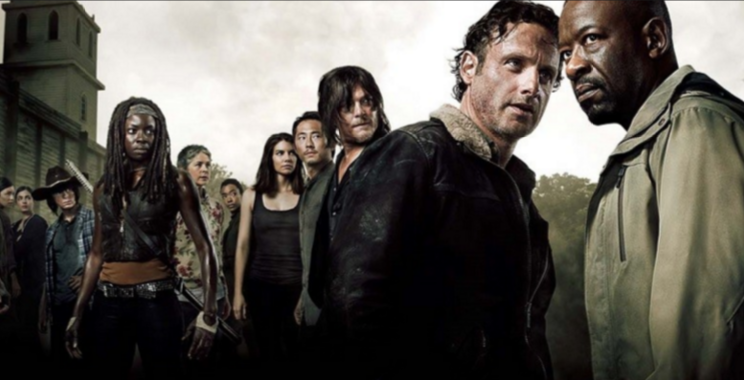 The Walking Dead returns in time to eat your heart out this Valentine’s Day (Sunday, February 14th) at 8 PM CT on AMC.

This is the part where I tell you that spoilers are very likely from here on out. So stop reading if you aren’t caught up…

This is your last warning…

Now it’s on you if things get spoiled.

Creator and comic book writer Robert Kirkman is on record for saying that there will be blood this Sunday…a lot of blood. Critics who were lucky enough to get early screenings say that the Season 6 midseason premiere is fast, action-packed, and characters will die. There’s common sentiment in early reviews that this episode should have been the midseason finale, instead of the cliffhanger filled showing fans got before the new year.

We know characters come and go on the show. If Game of Thrones taught us anything in the current climate of television, DON’T GET TOO ATTACHED TO ANYONE. And similar to how we’re approaching the new season of Thrones, we’ll be keeping a power ranking of the current characters. But if they make Chris Hardwick’s Talking Dead “In Memoriam”, well…

I know my opinion of each character will likely be very different than yours. Please feel free to air your grievances on Facebook or Twitter. 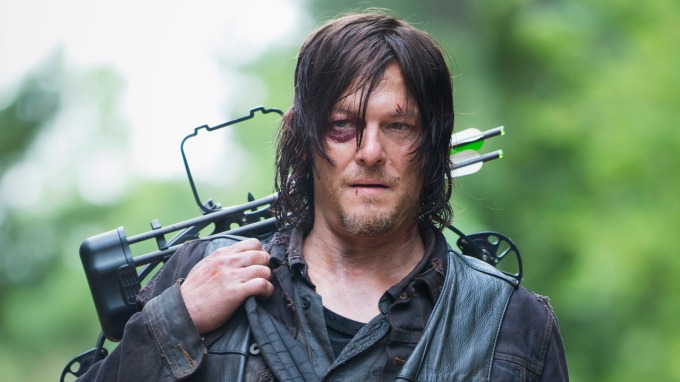 Darryl may not be in the comics, but he certainly is one of the best creations from the TV series. He’s the most skilled among the original group and has grown since the early days of brotherly bigotry bonding. In a world where the dead roam looking for blood and the living proves to be even more dangerous, Darryl still looks for the good in others…even to a fault. If he were part of Rick’s conscience, he’d be the small bit of angel left on one shoulder. That might do him in at some point, but you have to think losing Darryl would be the hardest for most fans. 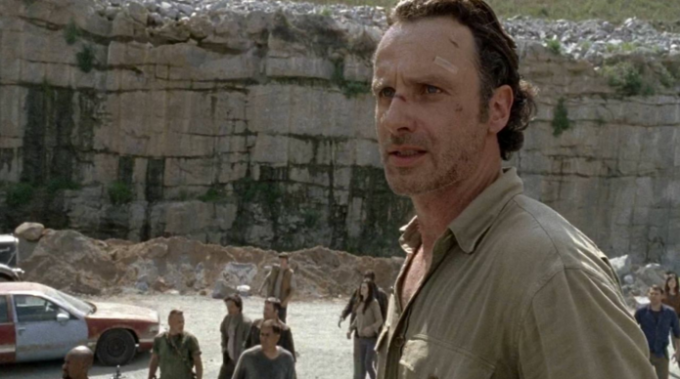 The show still evolves around the man who woke up from a coma in a walker infested hospital, as it should. However, Rick has almost evolved entirely into the deputy he hated…Zero trust for others besides his group, killing the living, lusting after someone else’s wife…He hasn’t gone full-Shane, and that may be what has kept he and those closest to him alive. How he reacts after Sunday’s events may change that. 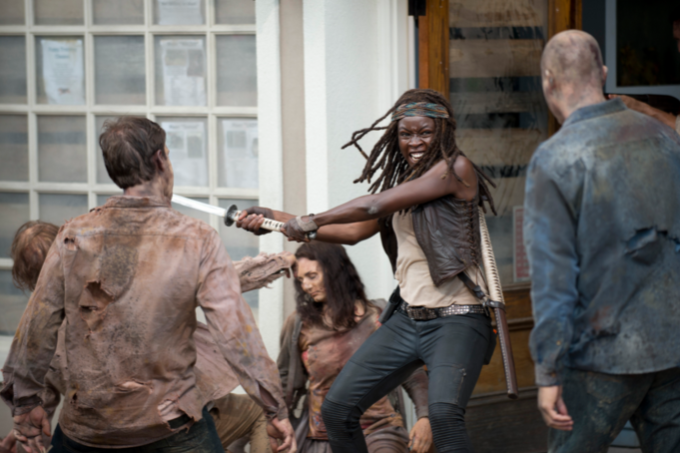 There’s an argument that Michonne can be ranked ahead of Rick.

She’s also the only one I don’t worry about in a massive horde of Walkers. Maggie has probably suffered the most in the group. She lost her home (the farm), cousin (Arnold), step-brother (Shawn), mother (Josephine), step-mother (Annette), father (Herschel) and sister (BETH!). Yet she has remained one of the strongest willed characters on the show, even while her husband was Jon Snowing it for multiple episodes. That’s why Deanna trusted her as a leader in Alexandria. Glenn cheated some insane and brutal death, but that whole thing didn’t seem like the way he should go. If Glenn’s going to die, his loved ones should see it and it should haunt our dreams for weeks. Only he can get away with calling Rick “dumbass” and he is still the group’s moral compass…while also being Maggie’s last shred of sanity. 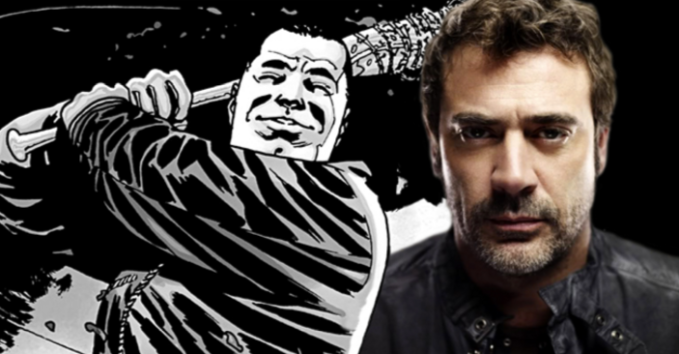 We haven’t even seen Negan yet he’s one of the most hyped characters in the history of television. That intrigue makes him more interesting, as does the suggestion by one of his cronies that EVERYTHING BELONGS TO HIM. 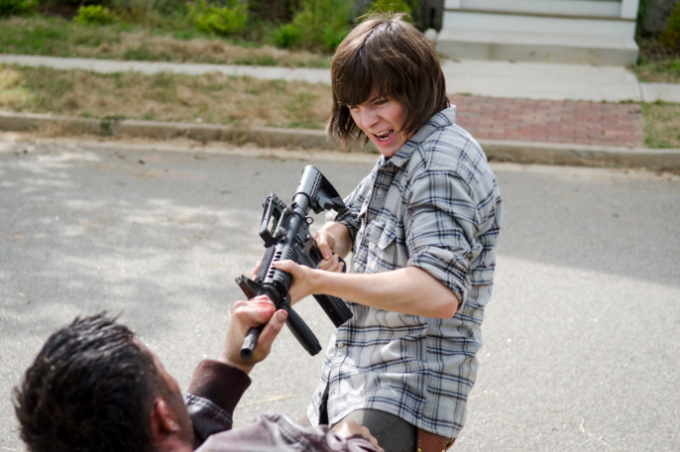 Carl’s come a long way. There was a time I wanted him to be in same place as Sophia -like between him getting shot and then Rick saving him from God-knows-what with the Scavengers…Since then, the kid has stepped up and become quite the badass and way less of a brat. 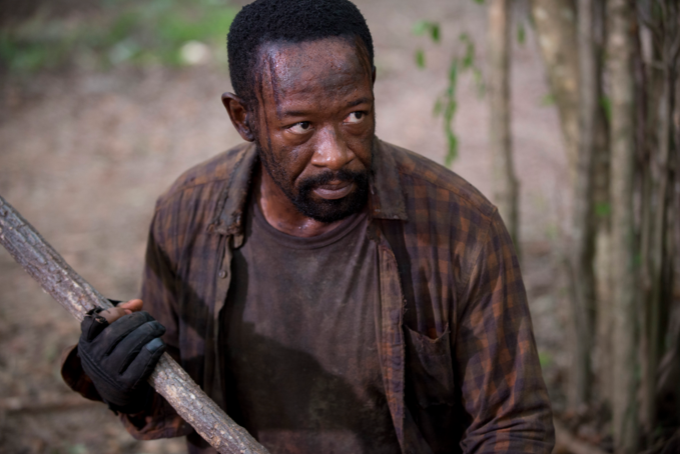 Morgan’s whole “development” episode with Eastman still feels like time I can’t get back, but it’s nice knowing how exactly he became a Jedi. Don’t know if the “no kill” rule is going to last for him or if he’ll last sticking to it. It does, however, bring some much needed humility to members of the group that are on the brink of becoming no better than the Wolves.

I know quite a few folks are on Carol’s side in the #CarolvsMorgan fight and I don’t blame them. Her instincts have saved the group on multiple occasions. Her development is as vast as anyone. She’s also the devil to Darryl’s angel on Rick’s shoulders. That’s ironic when you think about how similar and close she and Darryl were at one point. 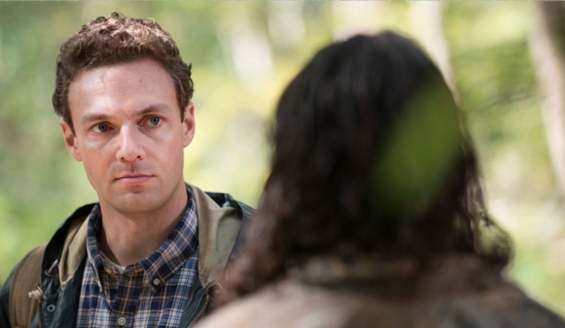 Aaron is the most capable of all the Alexandrian citizens. Unlike the rest of his group, he actually knew what the outside world was like after spending long periods scouting potential members for the community to make it stronger. Had Aaron been around when the Alexandrians were turning on Rick, he probably would have helped convince them to adapt to the Ricktatorship. 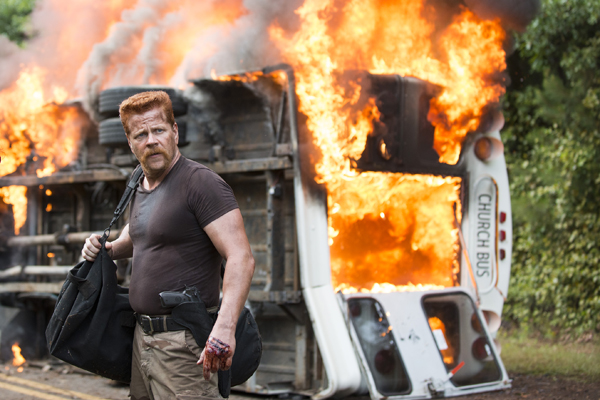 I love Abraham. When he’s got a mission, he’s more focused and and scarier than anyone. Unfortunately he’s been a little broken since Eugene’s admission. I’m worried he’s reached the end of his arc wearing the officers uniform he found, but the method in his madness has practically resurrected Sasha…no Walking Dead pun intended. 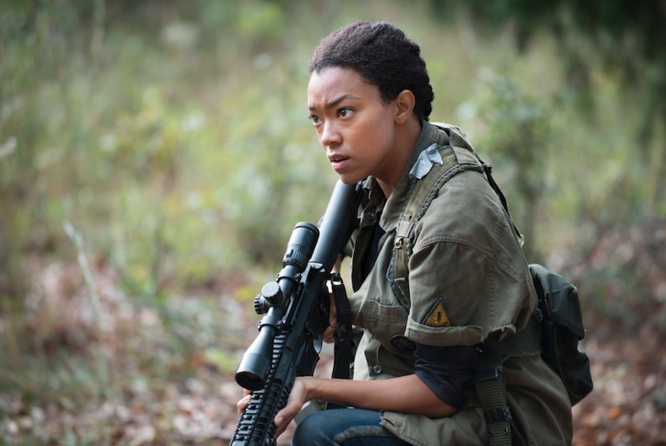 Sasha’s been the closest to the point of no return, among the group that’s survived since Woodbury. Losing Bob and her brother Tyreese certainly pushed her there. Abraham seems to have shown her just about how far gone she was though, mimicking her manic episode. Still not sure if he was doing that on purpose or not, but she’s as capable as anyone when she’s right. 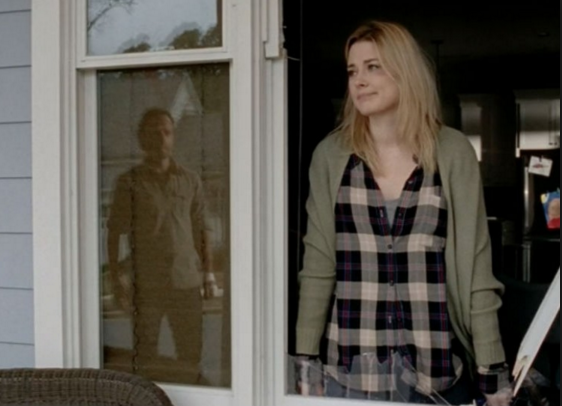 Jessie is Rick’s moral center now, outside of Carl and Judith. She will also go full Mama Bear from The Revenant on anyone who threatens her children. That’s going to get really interesting if Carl is forced to come off of Ron, or if the zombies get F’ing Sam while he’s whining during their stealthy walk among the horde. At least we have this ‘Love Actually’ inspired gif…

Just in time for Valentine’s Day. 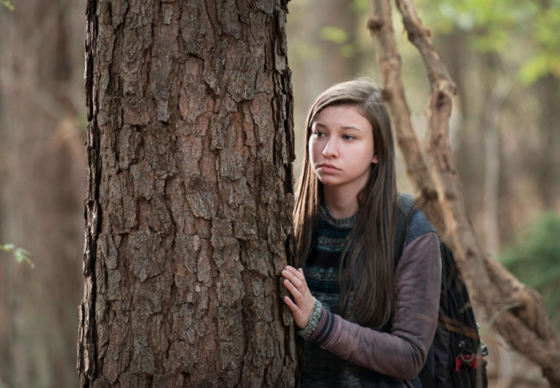 Enid’s awesome but pretty wishy washy too. She seems ready to turn on the group at any moment because she doesn’t believe they’re built to survive…even though they’ve made it this far. One thinks she’s better off and more helpful on Carl’s side than the alternative.

It’s pretty amazing how accepting the group is of Tara, considering she was aligned with the Governor when he decapitated Herschel. Her guilt being involved in that incident seems to have made up for it, and that’s mirrored with helping Eugene get to a point where he can redeem his own faults as well. 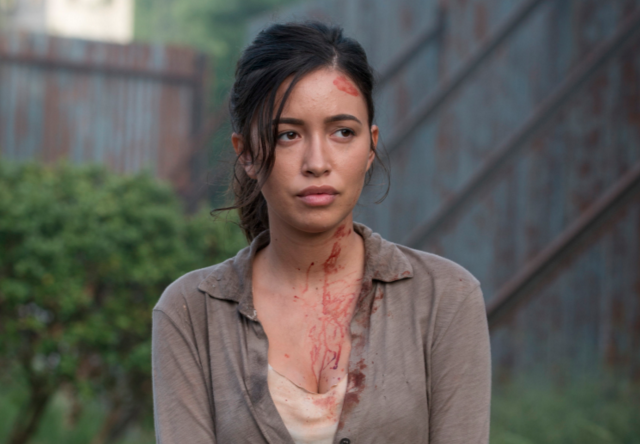 We know almost nothing about Rosita besides her catching up with Abraham and the two keeping each other company. She’s handy with a gun though and meshes well with the group. Either we’ll get to know her better after this weekend, or we’ll just simply say “see ya” without really being too invested. 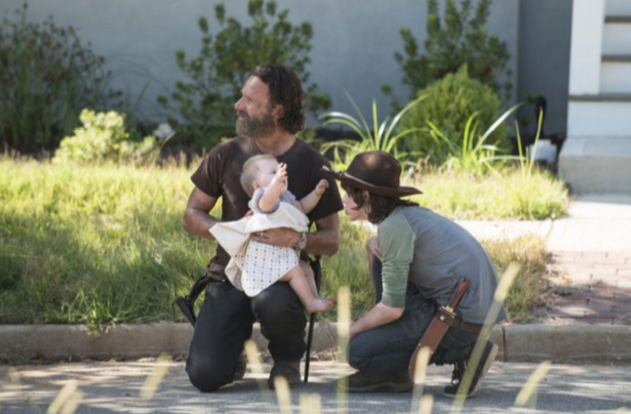 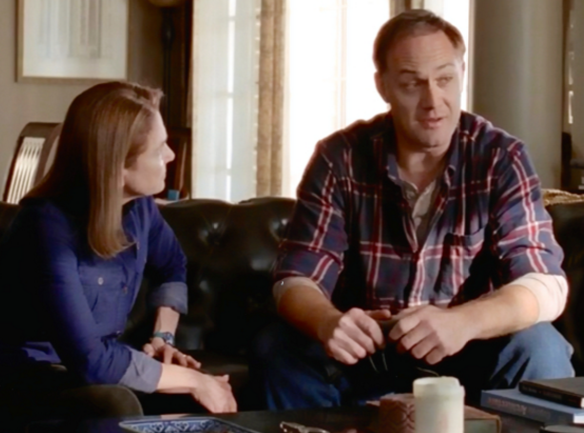 Tobin is really just one of those “That Guy” characters from the Alexandria group, but he’s one of the few to go along with Rick’s plans. That ranks him a lot higher than most of the town…unless the Walkers got him. We really didn’t see him after they breached the wall. 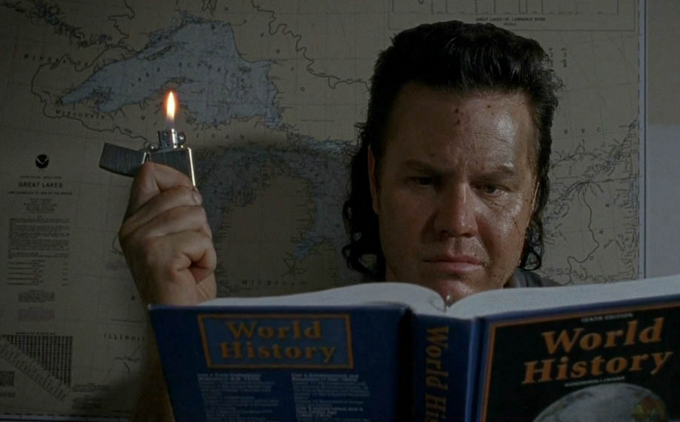 Eugene is working his way back to trust and redemption. His awkwardness and deadpan delivery kinda helps that, at least with the audience. Something tells me he’s got some developing to go and some lives to save before the show is done with him. Denise is in a tough spot, being captive (we think) to the Alpha Wolf. She has Tara’s attention (and probably motivation) though after kissing her and she’s probably the only one qualified to save anyone medically. 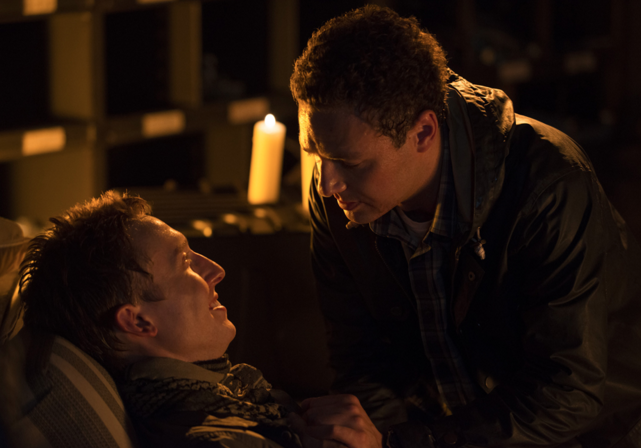 No idea how Eric faired during the breach from the horde. Whatever has happened to him might make or break Aaron though. 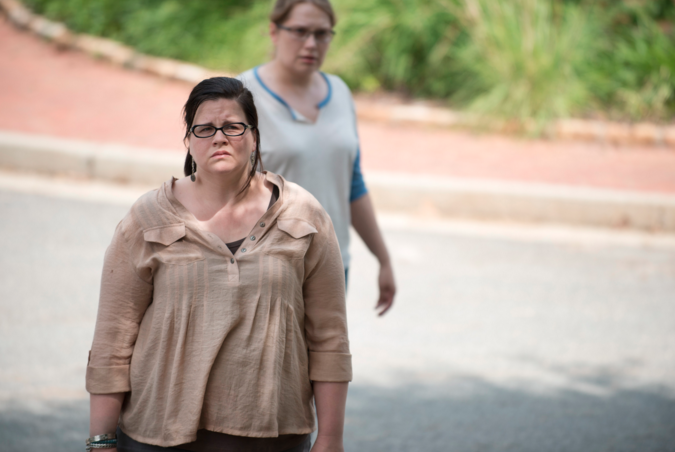 Olivia runs inventory at Alexandria. That counts for something. And I THINK she’s still alive…? 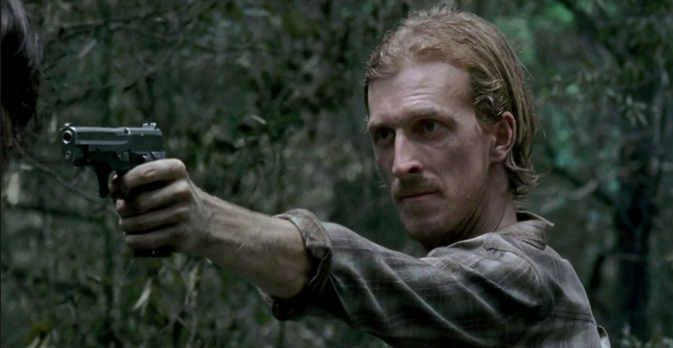 A few things we know about Dwight.

Austin Nichols, who plays Dwight, tweeted about coming back for the finale. Not sure how happy we’re going to be about that. 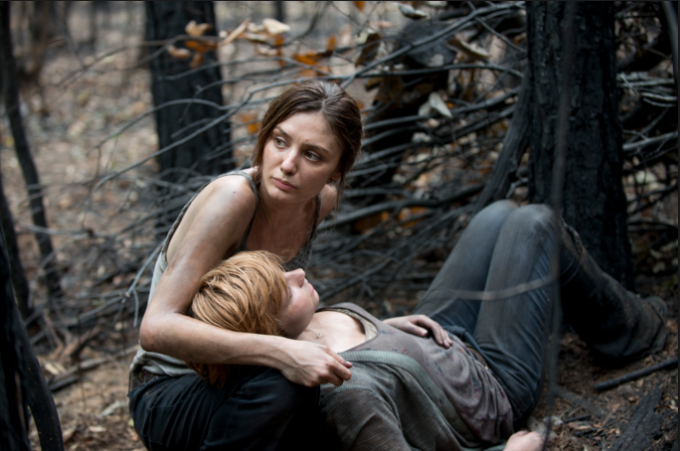 Honey is in the same boat as Dwight, when it comes to betraying both Negan and Darryl. I’m sure she’s going to wish she didn’t burn the latter.

Spencer’s in a weird spot. On the one hand, he’s Deanna’s son and has room to grow in her image. On the other hand, he’s reckless and stealing food from inventory. Why you gotta do Olivia like that, Spence?! 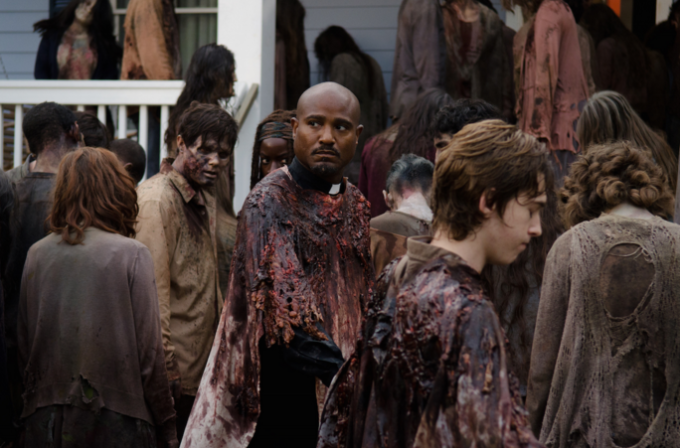 I have a soft spot for Father Gabriel because Seth Gilliam is one of my favorites from The Wire. His character hasn’t been much help at all since he met the group, even turned on them at one point while he was debating his relationship with God…I have to think there’s a reason he asked for fighting pointers from Carl though and that somehow that will payoff. 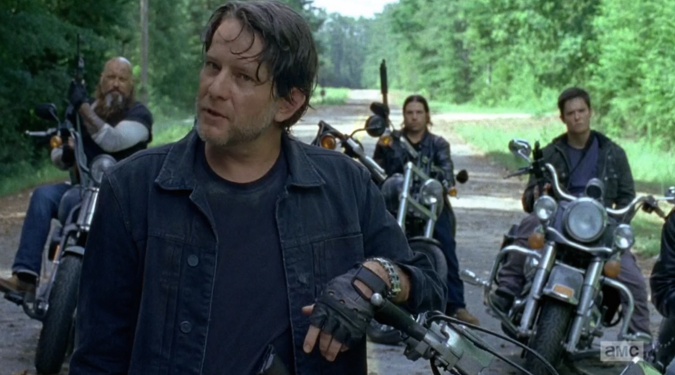 Dude gives off a Dean Ambrose vibe but until we officially meet Negan, you get the feeling he’s going to be a royal pain in the ass. I’m also worried one of the 3 out of Abraham, Sasha and Darryl is going to be departing because of him. 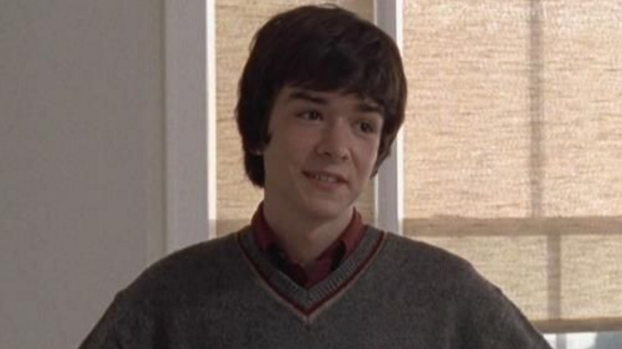 You remember Mikey, right? No idea if this kid is still alive, but at least he’s not Ron. 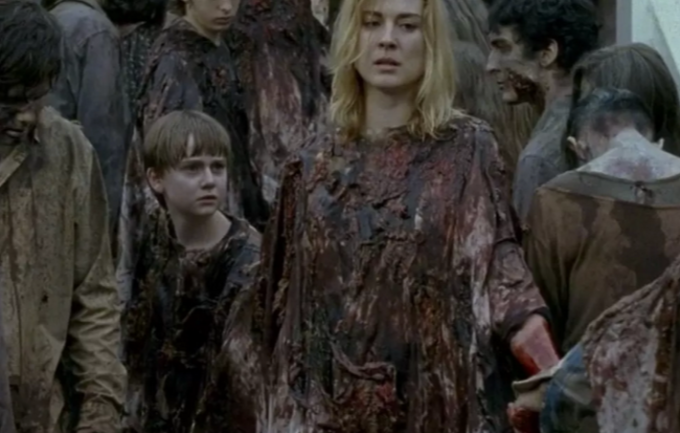 SHUT THE FUCK UP, SAM! 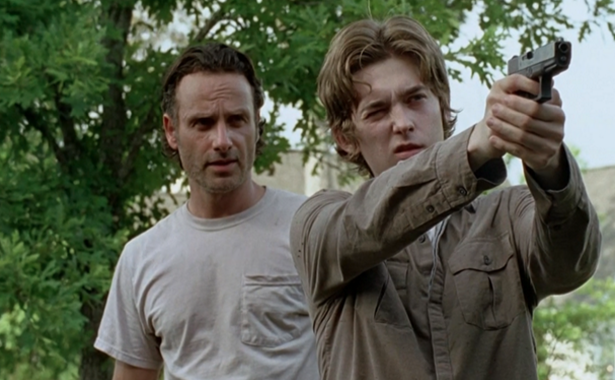 Ron has a gun and zero backbone. He’s basically everything that was wrong with Carl during that time we all wanted him dead. Yes, I hope his little brother gets him killed on Sunday. 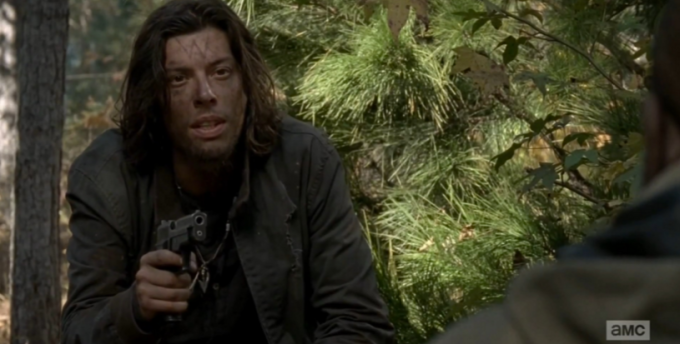 Right now, zombies are more likable than this guy. That’s how bad he sucks.

We’ll update the rankings each week for the rest of the season. Hope your favorites stay alive…Unless your favorite is Ron. For more, follow along on Facebook or Twitter.

And check out the first 4 minutes of Sunday’s midseason premiere now!