I love the Fourth of July as much as any holiday in the calendar year.

It’s a celebration of our nation’s independence, a time to get together with friends and family, a reason to eat ALL THE HOT DOGS AND BURGERS YOU WANT, and a solid excuse to blow shit up.

(If you work in Illinois law enforcement, I totally don’t have fireworks from either Wisconsin or Indiana in my trunk.)

This film should get the A Christmas Story “24-hour marathon” treatment on at least 3 networks every July 4th.

“The issue here is not that we broke a few rules…”. A scene and film that America’s founding fathers would be proud of…because F AUTHORITY!

On the heels of the release of the trailer for the new Rocky film, Creed, revisit the epic montages and eloquent post-match speeches that put Sly Stallone on the map. You’ll likely be doing your own impressions anyway.

In contrast to the previous Rocky IV scene (and Russian relations), and a year after…

My absolute favorite “Fourth of July” scene. In a high level security Nazi POW camp, the only 3 Americans in a prison filled with British officers celebrate by serving moonshine to all. The irony and symbolism is incredible.

As the late great Robin Williams once said “Canada is like a loft apartment over a really great party.” So why not take a friendly jab at our neighbors to the north, and then cheers them immediately after.

If you’re going to include one Matt & Trey, might as well include the other that is AS AMERICAN AS IT GETS. Couldn’t choose just one scene, so why not go with the montage?

There are few scenes in cinematic history that could properly capture a kid’s childhood on the Fourth of July like this one…and of course, Benjamin Franklin Rodriguez.

This one’s too easy…While Mel Gibson isn’t anybody’s favorite representative of anything these days, rallying your troops to never retreat with the symbol of your nation is still a nice touch.

No explanation needed…just Jack being Jack.

What’s more mythical in America than baseball? Opening Day is the closest thing to the Fourth of July in terms of pageantry and celebration that you’ll find in this country. So why not commemorate this weekend with one of the all-time great monologues for the sport…?

“Although our dreams of freedom have died a tragic death, the Hollies are still alive.”

Along the lines of gently lifting a middle finger to authority…I love this scene for the sole reason that the only American on the ship, Philip Seymour Hoffman, is the one to push the envelop even further while this band of British Rock N’ Roll DJs revolt against a government that doesn’t like good music. A modern Great Escape moment, if you will…

When it comes to rebellious teens and young adults, never underestimate the power of music…or Simon and Garfunkel.

In a world of social media and free speech, you’re allowed to get mad…get mad as hell and know your life has value. That’s what your founding fathers and mothers did. (Yeah, this clip makes you feel feelings.)

The Simpsons and Schwarzenegger. That is all.

Who do you play for?

It’s a beautiful thing when an African Prince (that you didn’t get a scam email from) can appreciate the little things when he first reaches our fine nation.

When I first saw this film, the entire theater gave an ovation when Quentin Tarantino gave us his spin on WWII history and Hitler’s fate. That was fantastic

Hard not to include the most American superhero in this ultra American compilation. Also worth noting that this is my favorite scene in my favorite Marvel movie.

It’s one of the most important in film history…and one that is still relevant in today’s America.

Just like how Die Hard is a Christmas movie, Jaws is very much a Fourth of July film. I mean, that’s when it takes place after all.

Have anymore movies and scenes in mind? Let me know on Twitter @Mike_PiFF03.

With half of the field in the books, let’s start voting on the second half.

[Update] Voting has closed. Winners below.

(15) Pirates of the Caribbean

Next round starts tomorrow. Check back at MichaelPiff.com 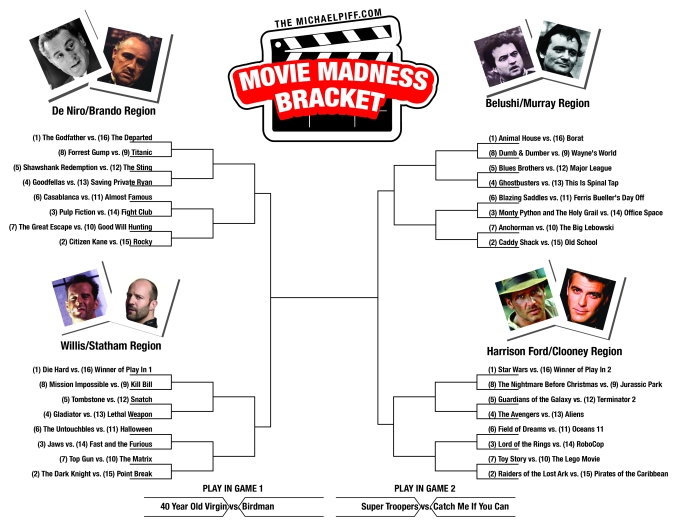 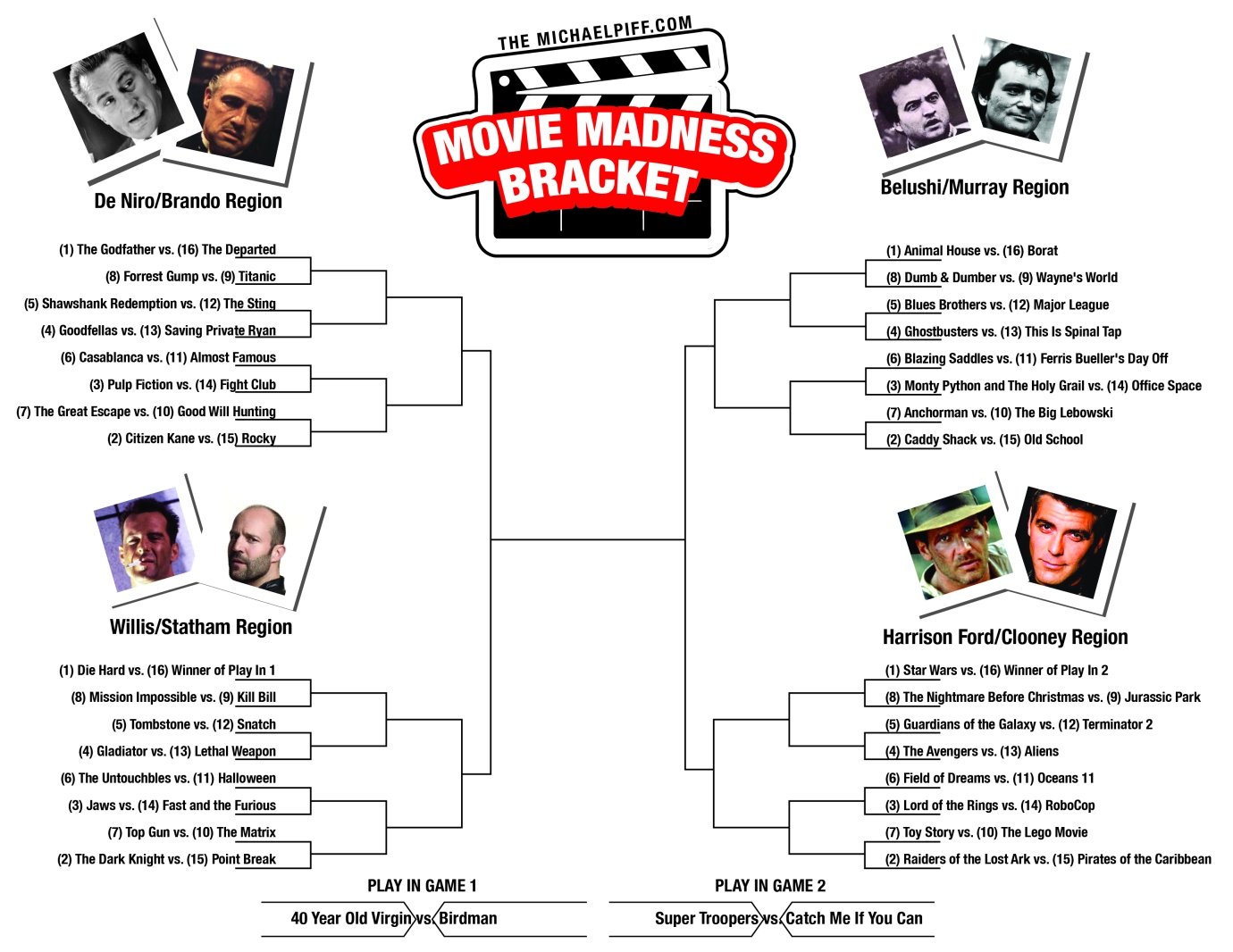 In College Basketball, they call this the First Round.

So now we’re looking for our Hampton and Dayton for the tournament.

And the winners will be rewarded with playing two of our #1 seeds, Die Hard and Star Wars.

[Update]: Voting has closed. Results are below. 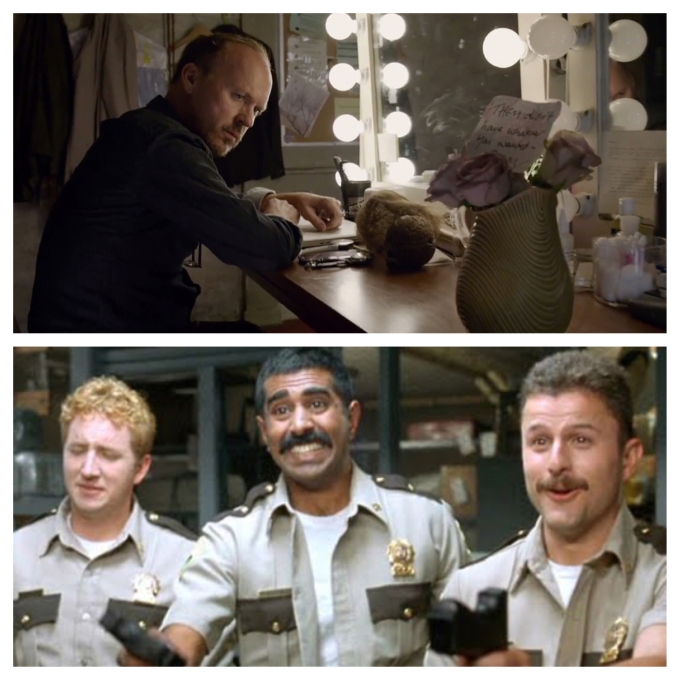 You get Die Hard and Star Wars next.

The Round of 64 voting will begin at 8:00 AM CDT. You can also Tweet votes to @Mike_PiFF03 with #MovieMadness when it starts. 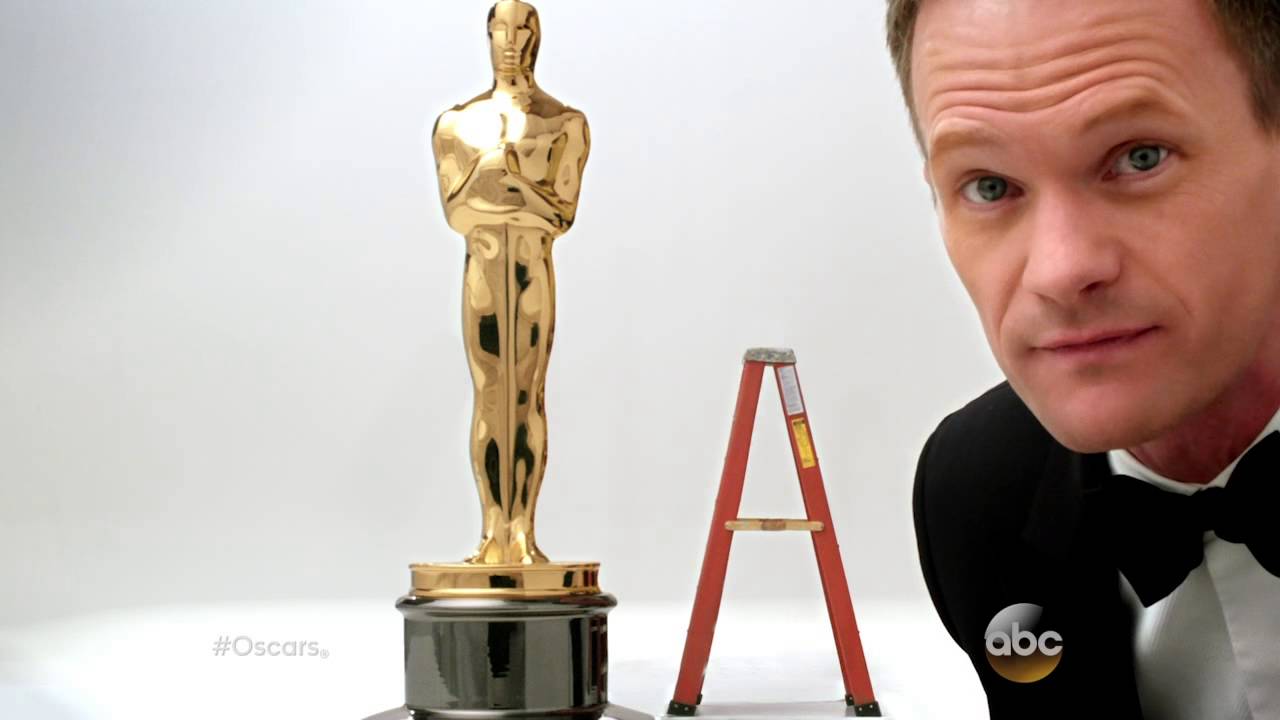 Awards season has flown by, hasn’t it? The Golden Globes and their weirdness feel like yesterday…

Wait, that was like a month ago? Wow. It has also felt like a quiet season too, in terms of big upsets and such…hold on a sec…

Back to the show…

Besides the actual awards being announced, I can’t wait to see what Neil Patrick Harris has up his sleeve. There are few hosts who are as much of a showman as NPH. Multiple Tony Award shows, the Emmys, and now the Oscars…? He’s just a Golden Globes away from his own Hosting EGOT. NPH be criticized and scrutinized like everybody ever to host it, but I expect nothing short of something Legen…wait for it…

If you need a reference of what to anticipate, check out one of my favorite award show opens of his.

Last year everything felt predictable. The Dallas Buyers Club boys, Matthew McConaughey and Jared Leto, took Best Lead and Supporting honors EVERYWHERE. Cate Blanchett did the same, like most Woody Allen characters do. Then Lupita Nyong’o and 12 Years a Slave, while not necessarily consensus favorites, didn’t surprise anyone with their wins.

This year isn’t so easy, and that’s a good thing. 2014 (and early ’15) was an excellent year in film and made it fun going to the movie theater every week. Why the Academy went with just 8 nominees for Best Picture is beyond me, but every film in the running is very deserving…

So was Guardians of the Galaxy.

Best Actor in a Leading Role

Michael Keaton – Birdman or ( The Unexpected Virtue of Ignorance)

Eddie Redmayne – The Theory of Everything

It’s a loaded category. Benedict Cumberbatch was flawless in Imitation Game. Controversy over the man he depicted aside, Bradley Cooper rocked the “Punisher” logo he wore HARD. Steve Carell made everyone’s skin crawl (although I was more interested in Channing Tatum’s performance). And Michael Keaton carried the suspense of a bomb you were anticipating to explode…without the timer.

Eddie Redmayne’s performance as Stephen Hawking though was too special to deny. While I would love to see the award go to either Keaton or Cumberbatch, it’s Redmayne’s to lose at this point. His transformation into Hawking has won at nearly everything and fun fact…

The SAG winner in this category has won 100% of the time in the last decade.

(I do have to mention that I felt David Oyelowo was horribly robbed of a nomination in this category. Every bit as deserving as Cumberbatch, Keaton, Carell, and Redmayne…You can figure out who I left out.)

Best Actress in a Leading Role

Felicity Jones – The Theory of Everything

I know…Nothing too controversial here. Moore has won in nearly every awards show that matters. Cotilard won the New York Film Critics Circle award…and good for her. Moore is as every bit of the accolades for her role in Still Alice, and it’s amazing that this will likely be her first win in 5 tries. But if there was a sleeper pick to make here, I would take Felicity Jones. You couldn’t ask for a better compliment performance to Eddie Redmayne’s than Jones.

Best Actor in a Supporting Role

Edward Norton – Birdman or (The Unexpected Virtue of Ignorance)

I feel bad for Edward Norton. He put out arguably his best performance of a great career in Birdman, but J.K. Simmons was just. too. good…

Best Actress in a Supporting Role

Emma Stone – Birdman or (The Unexpected Virtue of Ignorance)

Meryl Streep – Into The Woods

Yeah, I can’t play the favorite on this one. Patricia Arquette has been cleaning up at award shows all season and I really don’t understand it. Yes, she was moving…but she wasn’t a showstopper like Emma Stone was.

Birdman or (The Unexpected Virtue of Ignorance)

The Theory of Everything

I understand that this has turned into a 2 horse race between Boyhood and Birdman in terms of odds, but Birdman was clear and away the better film to me. I was more interested in how Boyhood was made than the actual product. Richard Linklater should, and probably will, win Best Director for presenting an entire childhood in 3 hours, but there wasn’t much of a story and the performances didn’t wow me more than the gimmick…

Birdman, on the other hand, is filled with performance after performance that grabs you by your collar, unpredictable, and has you at the end of your seat. Watching Boyhood, I just waited for Mason to finally grow up…but I loved the soundtrack.

That’s just me though…

Who are you picking to win tonight? Let me know and let’s talk about the show on Twitter @Mike_PiFF03.