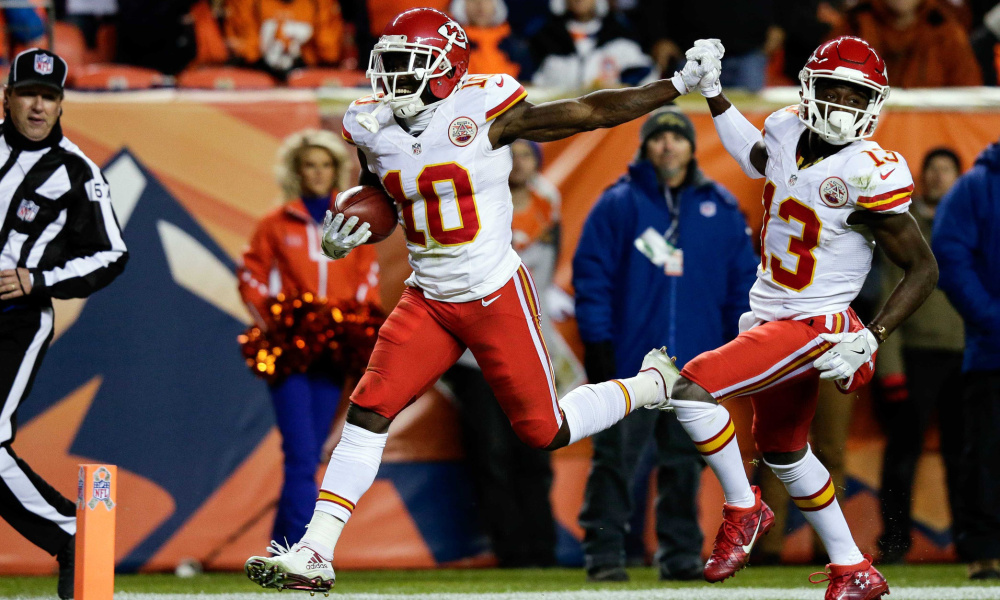 Tyreek Hill hit 22.77 mph during this return, the fastest speed of any player in the NFL this season. #TouchdownTuesday #KCvsATL pic.twitter.com/GQ5SJW8l6O

Some of his success can be attributed to Special Teams coach Dave Toub (who helped make Devin Hester a household name), but the dude is pure speed. Expect him to be a consistent weapon as you (and the Chiefs) make the playoff push.

I’ll start with Thomas Rawls. I think it’s time the Seahawks let him off his leash, because you can’t trust anyone else on that side of the ball. The Panthers are also allowing nearly 400 yards rushing in their past 2 games…

Then I would start Todd Gurley due to the fact that Jay Ajayi has crashed to Earth faster than the first asteroid in Armageddon.

Diggs is likely to play tonight. So Crabtree.

Dak is indeed the realness, but I would have a hard time sitting Matthew Stafford. Think about it this way. The Lions DON’T run the ball. Volume should be astronomical for him. I’m not really afraid of the Vikings entirely as a defense, but I do worry about Dez Bryant paired with Xavier Rhodes.

See my response to Donald’s question. Stafford. You also don’t want to leave your do or die game to a Thursday Nighter.

This will help you out better than any stats I can give you. It’s unlikely that Jordan Reed will play this weekend, per Adam Schefter. 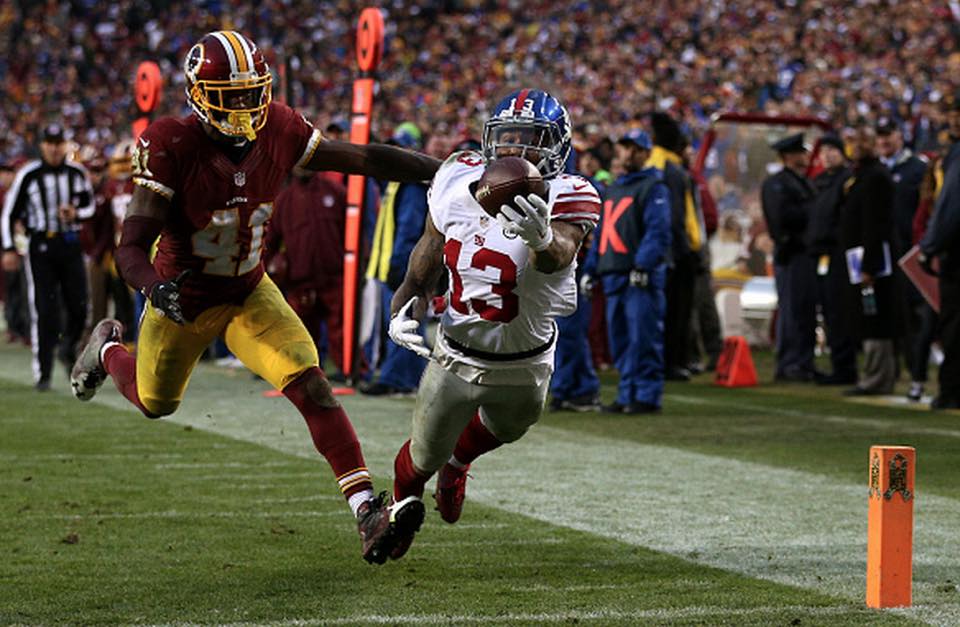 Each Week 13 I like to remind Fantasy Football participants to thank their league commissioners for organizing everything…as long as they scheduled the playoffs to start next week and the championship to take place Week 16.

By the end of the season, you’ve come too far to worry about players on teams who have their division clinched and will potentially be rested Week 17 to make a run in the playoffs. Right now, I would worry about the Patriots, Cardinals and even the Panthers (who could be undefeated still) doing exactly that.

Now for immediate concerns, you are…

A) all good and have clinched a playoff spot. Just playing for the best seeding possible.

B) fighting for a playoff spot. It’s already win or go home.

C) hoping to spoil things for anyone that (B) applies to. It’s about pride at this point.

There is a “D” but you don’t want to be that person. You know, the person who drafted a team and didn’t give enough of a shit to do any maintenance on their roster at all, even after paying dues for a cash league. I played against Jordy Nelson last week. That’s all you need to know.

[Update] Jets Head Coach Todd Bowles was asked about Revis’s status this week and responded with “I don’t think so.”

I don’t like Antonio Andrews, or any Titans RBs, at all but seeing Charcandrick West practicing with the Chiefs again leads me to believe Spencer Ware is going to lose a lot of touches. If West plays this week, go with the starters in Andrews and Shaun Draughn. I wouldn’t expect touchdowns out of either, unfortunately. If West doesn’t go, plug Ware in for Andrews.

I understand the concern with Tom Brady, but haven’t we seen this story before? Without Gronk, Julian Edelman, and Danny Amendola, Brady threw 3 touchdowns against the best defense in the league. This week he plays the Eagles and could likely have Amendola back. Philly has given up 10 touchdowns in the last 2 week, and Brady has built a reputation for making something out of nothing (no-name receivers).

If you’re having strong enough doubts, this could be a great week for Ryan Fitzpatrick if he’s miraculously available on your waivers. Bryan Hoyer and Ryan Tannehill could be okay plays if you’re desperate.

The James Starks thing has come and gone, as Eddie Lacy has woken up finally. Now it becomes a question of whether or not you believe in CJ Anderson or not…

If Anderson is going to keep coming back into our good graces, it would be against the Chargers. They have allowed double-digit rushing TDs and 1,800+ rush yards. My gut tells me the Broncos will ride the hot back, just like they should ride the hot quarterback. So start CJ.

For matchup reasons, I have to lean toward LaGarrette Blount over Latavius Murray. The Chiefs have only allowed one back to run for more than 71 yards and have given up 1 rushing touchdown since Week 5. Meanwhile, the Eagles look like they’ve quit on their coach.

Similar to my reasoning to start Tom Brady and LeGarrette Blount, that’s why I like Scott Chandler this week. I picked him up in both my leagues (starting him in the one without Gary Barnidge), because Brady loves targeting his tight end. Last time Gronk missed significant time, Brady made Mike Hoomanawanui relevant.

If that doesn’t convince you, Eric Ebron would be a sneaky pickup tonight as the Packers have allowed a touchdown to TEs in 4 straight matchups. The even sneakier move would be Cameron Brate against the Falcons with Austin Seferian-Jenkins still down.

RB: If the Rams offense wasn’t a complete dumpster fire right now, I would say Todd Gurley is a no-brainer. But they are and that means he isn’t. Tony Romo going down means Darren McFadden is going to get all the checkdown passes he could dream of from Matt Cassel. I feel better about McFadden’s floor than Gurley’s ceiling this week.

QB: If Jay Cutler is available, go get him. The 49ers defense is a very different squad on the road than they are at home, allowing 35 points per game away from Levi’s Stadium.

WR: TY Hilton and Eric Decker are easy picks for me. The Steelers are giving up the most catches and  2nd most yards to receivers, and Decker is a touchdown machine scoring in 8 of 10 games. I like what D-Jax has done since returning, but the Cowboys pass defense is brutal.

QB: I am going to go with my common theme for this post, trust the Cooter. I am going to use the Lions OC’s name for as long as I can, so deal with it. Stafford’s got a hot hand and Rivers has a bad matchup.

I feel weird saying this, but I like Ryan Fitzpatrick a lot more this week. The Giants secondary is allowing 250+ yards and at least one touchdown to every QB they’ve faced. Meanwhile, I think the Packers are going to get Rodgers killed tonight…but he could always be “RODJAS!” again.

We do have a “Thor” in our league. Otherwise, I recommend GREG, SON OF OLSEN! 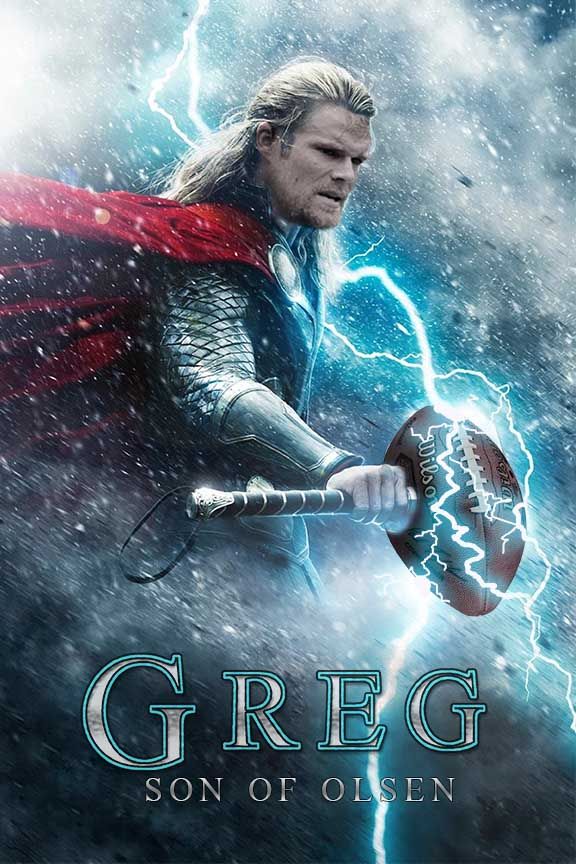