The second half of the fantasy season starts tonight with an AFC North rivalry matchup between the Bengals and the Browns. It’s likely been a serious waiver wire week for you with bye weeks and injuries to Le’Veon Bell, Matt Forte, Keenan Allen, Steve Smith Sr., and the entire Niners backfield all included. Let’s take a look at the best top waiver wire picks from this season. Coincidentally, a few will be featured in tonight’s game on NFL Network.

Any reason to recount that A-Dalt touchdown, I’ll take it.

In the first handful of weeks, people waited for Andy Dalton to fall apart and he didn’t. There was also a stretch of 4 games with potentially tough passing matchups (Baltimore, Kansas City, Seattle and Buffalo), and Dalton averaged 319.5 yards and 2.25 touchdowns against them. Having AJ Green and Marvin Jones healthy and Tyler Eifert playing to his potential are huge factors for that and why his success should sustain.

When you’re a running back in Bill Belichick’s system and you get on his good side, your numbers are going to benefit greatly from it. Dion Lewis was expected to be Shane Vereen’s replacement, but he’s he’s Shane Vereening better than Shane Vereen could (if that makes sense). In the 6 games Lewis has played, he has had more with double-digit touches than Marshawn Lynch, has scored touchdowns than Adrian Peterson, and more 100+ total yard games than Frank Gore and Justin Forsett.

As Blake Bortles’s stock has risen, so has A-Rob’s. You can’t really sit him when he’s averaged 5.5 catches, 93 yards and 1 TD over the last 6 games. Robinson also leads all receivers in receptions of 20+ yards with 14.

Oh you didn’t draft Gronk? No worries because Gary Barnidge was available for EVERYONE after the first 3 weeks of the season. 30 years old and playing better than the rest of the tight ends in the league, Barnidge has scored touchdowns or caught for over 100 yards in every game since Week 3.

QB – That’s a really nice problem to have. While Philip Rivers is going to continue throwing it more than anyone with crazy high volume, but Ben Roethlisberger has the better matchup with better weapons to throw to as well. The Raiders are allowing 312 pass yards per game, 2nd most in the league.

WR – I’m not as jealous as this group as I was your QBs. I feel the most comfortable about Eric Decker against the Jaguars. Ryan Fitzpatrick being a little banged up means he’ll go to his possession option more which is Decker, and he has scored in 5 of his last 6 games. Then I go with Stefon Diggs despite facing a tough Rams defense. Diggs has earned the starting spot as the Vikings downfield playmaker. Not only do I hate Hilton’s matchup and quarterback (at the moment), the MRI he had on his foot and missing some practice doesn’t give me much optimism.

Time for the “Reverse Rivers”…which isn’t as suggestive as you think, ya sicko!

Philip Rivers is going to throw a ton on Monday Night Football with the San Diego run game being weak and the Bears only giving up 2 rushing touchdowns all weekend. He’ll be without Allen, but he has to chuck it out of necessity. In games that Rivers has thrown at least 37 passes, he averages 381 yards and 2.4 touchdowns. The gameplan for the Bengals tonight should be very run oriented anyway as the Browns are giving up more rush yards than anyone in the league.

Does Los Angeles count since they’ll be receiving the Rams soon?

I really wanted to pull the Lee Corso “Not so fast, my friend!” but I can’t, in my heart of hearts. Tavon Austin is the one decent option if your league counts return yards and you need a spots start out of someone. Austin has 6 total touchdowns with 2 coming on the rush, and 141 yards running too.

But Todd Gurley is the only viable option out of St. Louis and in a big big way…

WR – Neither option is great and they are both going against incredible pass defenses, but I lean toward James Jones simply for the Aaron Rodgers factor.

QB – Big Ben for the reasons I listed above.

…and Todd Gurley is the realness. He’s the best running back in the league right now and if he stays healthy, I don’t see that changing anytime soon.

Week 1 is in the books, and we’re off and running!

The return of the NFL to your Sundays, and big return touchdowns from Tyler Lockett (SEA), Jarvis Landry (MIA) and Tavon Austin (STL), had everyone buzzing after the weekend. Top receivers like T.Y. Hilton (IND) and DeSean Jackson (WSH) had Fantasy managers all over the waiver wire for suitable replacements. If you had Peyton Manning, have you already tried handcuffing him in a trade for someone who you feel confident about throwing further than 10 yards?…I did.

I know Donte Moncrief became a favorite pickup for many after Hilton went down in Week 1, and I get it. Moncrief has all the measurables, the speed, and the quarterback that make him viable as Hilton’s replacement. However, I don’t love him against the Jets and Darrelle Revis. In two games against Revis, Hilton recorded just 4 catches for 60 yards. That doesn’t spark much excitement from me for Moncrief…While the Rams defensive line is indeed terrifying, their secondary allowed the 3rd most catches to wide receivers last week and that bodes well for Washington’s new #1 WR Pierre Garcon. During his string of starts in 2013, Kirk Cousins targeted Garcon an averaged of 12.2 times over 5 games. Moncrief still has to share balls with Andre Johnson, Phillip Dorsett, Coby Fleener and Dwayne Allen. Rashad Jennings made things murkier after throwing his quarterback under the bus, while also losing touches to Andrew Williams and Shane Vereen. I like Tevin Coleman most longterm, as he separated himself as the more reliable back from Devonta Freeman. For Week 2, Garcon is your best option.

To answer your first question, go Matt Ryan for sure. I know the Bears secondary looks very tempting, but the Giants look even worse with their unit. If the Tony Romo was able to shred them without Dez Bryant, imagine what Ryan will do with both Jones and Roddy White healthy….

Your first option at running back should be Latavius Murray. The Ravens defense got worse against the run losing Terrell Suggs, and Murray was used like an every-down back and useful in PPR catching 7 passes against a better Bengals D….Sankey looked great last week, but when has he proven that he can be consistent on the pro level? CJ Anderson is banged up and Ronnie Hillman certainly emerged as a threat to take touches away. Joique Bell also didn’t do anything to quiet the Ameer Abdullah fan club…Only because the matchup isn’t great for Anderson do I recommend Sankey over him, but it’s very begrudgingly. The Browns may be harshing his mellow very quickly.

See my previous answer about the latter 2 and just go with TJ Yeldon. The Jaguars offensive line graded out in the Top 3 for run blocking last week and Alfred Morris burned the Dolphins defense for 125 yards.

One can assume LeGarrette Blount is going to get feature back duties this weekend returning from suspension, but when could you ever assume anything with Bill Belichick running backs? Blount also comes back against a scary Buffalo front 7…Danny Woodhead, on the other hand, took more than half of the Chargers snaps last weekend, scored 2 touchdowns, and was the second most targeted player for Philip Rivers. Rookie Melvin Gordon may get more work in his second start, but I trust Woodhead’s opportunities over Blount’s…especially in the red zone. 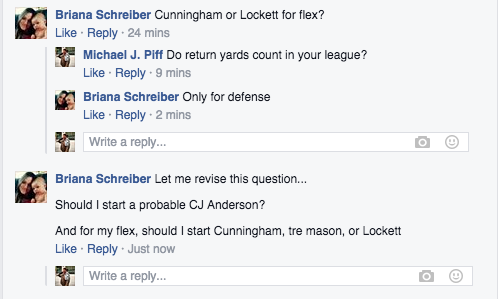 The most reliable player in this scenario is CJ Anderson, and that’s scary. With talks that both Todd Gurley and Tre Mason being ready to go this weekend makes Benny Cunningham a lot less valuable. I would recommend Lockett if you got return points for him, but he still needs to grow in the Seattle passing attack with Doug Baldwin and Jermain Kearse well ahead of him.

After taking more snaps than Joique Bell and proving he’s a much better home run threat, Ameer Abdullah made a lot of people right about him. He also has a better matchup going against the Vikings than Woodhead does against the Bengals. I would like to see Abdullah pickup where Carlos Hyde left off last Monday Night.

The one person benefiting from Peyton Manning’s short pass strategy is Emmanuelle Sanders. Especially in PPR, he’s a must play. Second, I trust John Brown against the Bears secondary. Larry Fitzgerald will get most of the attention leaving not much to take on Brown’s speed downfield.

In regards to James Jones, he caught 4 passes and scored 2 touchdowns last week against Alan F’ing Ball (who wanted know part of covering inside the end zone) and a struggling Kyle Fuller. There’s a reason Jones was available for the Packers to pick him up before the season started, and I don’t think his skills are suddenly back to 2012 quality. Rodgers makes him a better player, but Davante Adams and Ty Montgomery are younger…and possibly more viable.