While the weather forecast may have called for overcast skies (a day after disheartening April blizzards in Chicago), there’s still a ray of sunshine breaking through any and all mundane mediocrity clouding your life. For one day, every cliche and sports movie monologue feels as inviting as the guy selling programs when you walk through your favorite stadium’s gate.

Only a handful of teams are playing today, the Cardinals, Pirates, Blue Jays, Rays, Mets and Royals. The whole league will be in action tomorrow and the hometown love will pour over each respective ball club, but it’s amazing how we can all be just as excited today. Is it because everyone is tied for first place at this very moment? Do we forget that there are 161 games to go and anything can happen from now till October? Or is it because we just can’t help but “get romantic about baseball”?

The romance is real. It hits you when you first climb the steps from the concourse toward your seats at Wrigley Field, much like walking up a ramp to your aisle at Fenway Park when the sun starts to set. If you’re lucky enough to share that with someone, don’t take it for granted. As a White Sox fan, I lose myself in their brand new pregame montage every year, with moving music and memories. I forget I’m 28 years old and involuntary noises erupt from my windpipes as the fireworks signal it’s time to begin. There are micro-versions of these instances throughout the long regular season, but nothing compares to the first.

I could go into a long thing about hope for every team, only for someone (maybe myself) to shoot it all down with projections, sabermetrics, and the pessimistic cold hard reality check that not everyone is meant for the playoffs. However, baseball is weird…quite possibly the weirdest of the major sports. While numbers, trends, and track records are real and incredibly valid, you can’t predict injuries, suspensions, personal issues, trades or the litany of fortune-bending occurrences that are bound to happen over the next 6 months.

Also alluring is the mystery of what kind of greatness and individual accomplishments this new season will hold. Who will be the closest to batting .400? How long will someone go in their hitting-streak, and will the challenge Joe DiMaggio? Who will throw the next perfect game? Can anyone emulate the 1998 home run race between Sammy Sosa and Mark McGwire (and not be busted for steroids)? Where will longtime veterans finish on the all-time lists (Alex Rodriguez, David Ortiz, Albert Pujols) and who can we get excited about to possibly surpass them someday (Bryce Harper, Mike Trout, Kris Bryant)? Who will come out of nowhere?

Right now, more than any time the rest of regular season, you can comfortably be a fan. You can be excited. You can be optimistic. You can be a full grown…kid. For a few hours at a time, you can escape to a game you love and forget about the drama and stresses of life for a little bit. It’s Opening Day. Just have fun. 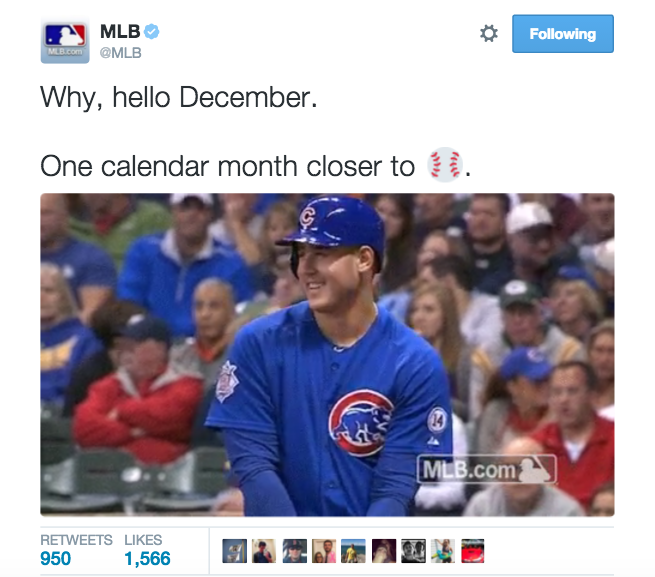 Professional sports have caught up with social media and any team not having fun is just doing it wrong.

Major League baseball just started an excellent Twitter thread that will brighten your day if you need it. It began with a happy greeting and an Anthony Rizzo grinning gif…

Why, hello December. One calendar month closer to ⚾️. pic.twitter.com/lhsA6SxVbr

…and the Red Sox…

…it took on a life of its own.

Rockies. They were late, apparently…

…but had a decent excuse.

The DBacks allowed it.

…welcome to the party.

…and the Defending NL Champs

@MLB we hear ya! #LGM pic.twitter.com/8S7QKGLEQQ

The Cubs had thoughts…

…to which MLB happily replied. 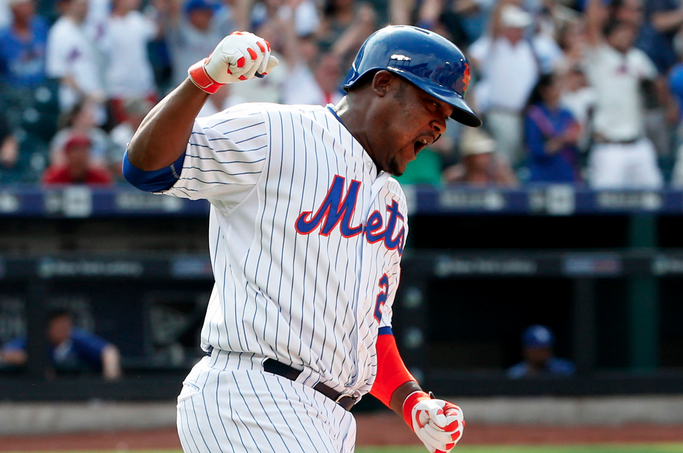 The Fall Classic kicks off in Kansas City tonight on FOX at 7:07 PM CT. The Royals are making back-to-back trips after a nearly 30-year World Series drought. It’s been 15 years since the Mets were in the World Series and they haven’t won since 1986, the year after the Royals last did. Fun Fact: Neither team has ever won Game 1 of the World Series. Combined both teams are 0-7 in that regard. Also, Joe Buck will have the call and everyone will be convinced he hates their team. Both Royals and Mets fans are readying their angry tweets.

Both teams are very exciting for the objective baseball fan. The Mets have an incredible starting rotation and the Royals have the best bullpen. Daniel Murphy is doing video game things hitting 7 home runs in the playoffs and Ned Yost doesn’t give two shits about your baseball sensibilities when it comes to bunting and running. I, however, don’t care for either team.

As a fan with illogical and irrational feelings, I hate the Royals the most. I’m a White Sox fan and while people in Chicago struggle with my lack of Cub-hate, I target my frustration and dislike to the other teams in the AL Central. Whichever team is preventing the White Sox from making the playoffs the most (besides themselves), that’s who gets the majority of my distain. The Detroit Tigers used to be that team, but now the Royals carry the torch for my White Sox rivalry rage.

The Mets receive a different brand of loathing from me. Having grown up around Chicago, there’s natural detest in me and many for that giant east coast city, their tough-guy accents and pizza arrogance. For the record, I love New York but love when my teams face theirs way more. However, there’s one player who was just named to the Mets playoff roster who I can’t say a single bad thing about. His name is…

Juan Uribe is everything that is good about baseball. He has fun. His teammates love him. He’s also no stranger to the big moment. Over his 15-year career, this will be Uribe’s 3rd appearance in a World Series. He made the final throw-out to win it all for the 2005 White Sox, homered for the Giants in another winning effort in 2010, and now he’s back to keep the 5-year trend alive.

Uribe makes the Mets’ World Series roster wearing his third different uniform this year alone. He joined the Mets in a trade with Kelly Johnson from the Atlanta Braves, and started the season as a Los Angeles Dodger. Uribe actually ended the 2014 regular season as acting manager of the Dodgers, while also paying tribute to Don Mattingly and Tommy Lasorda.

As a manager, Uribe has a 1.000 winning percentage and a Gatorade shower as well. 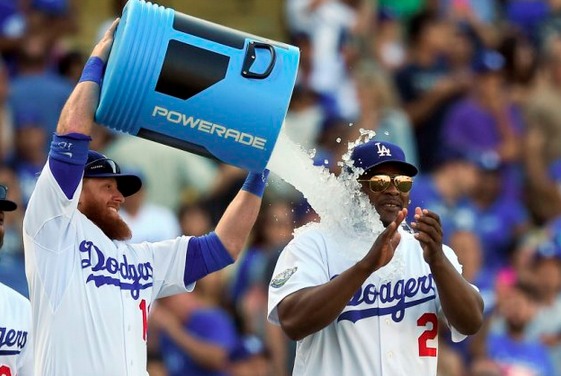 Now Uribe can end this season with his third World Series ring. He has a chance to become the 4th player in MLB’s expansion era to win 3 world championships with 3 different teams, after Jack Morris, Dave Stewart, and Lonnie Smith. His Mets tenure hasn’t been particularly special, batting .219 with 6 home runs and 20 RBIs in 128 at-bats (Murphy has matched that production in these playoffs alone), but it’s hard not to root for the guy.

Of course my White Sox sentiments have a heavy influence on my admiration for Uribe. In the 10th anniversary year of their World Series win, at least one of the players from the roster are competing for it again. He’s one of 5 players from the 2005 White Sox roster who were still active in 2005 (AJ Pierzynski/ATL, Mark Beuhrle/TOR, Neal Cotts/MIN, Brandon McCarthy/LAD). Uribe also gave me one of my favorite baseball memories, catching a ball in the stands during the World Series that I’ll contend was better than Derek Jeter’s famous dive…somewhat irrationally, I’ll.

A year ago, I actively avoided the World Series. I had seen the Giants thing before and you already know my feelings about the Royals. This year, I’ve got Juan Uribe and will happily buy his jersey if he gets to light victory cigars again. 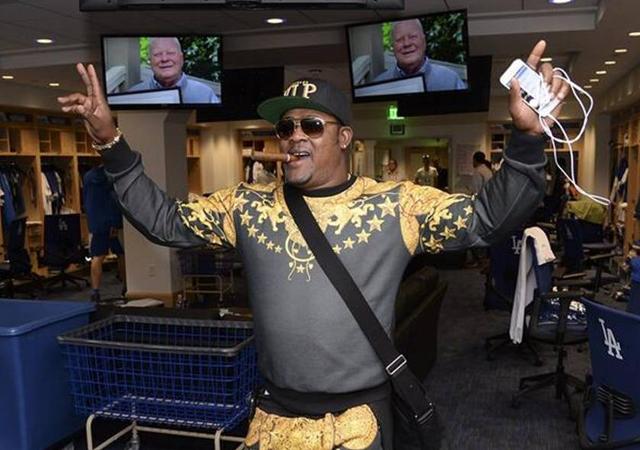 Who are you rooting for to win the World Series? Let me know on either Facebook or Twitter.