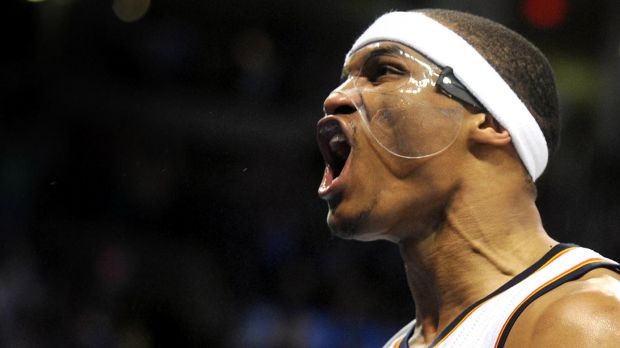 The early reviews are in on ‘Mad Max: Fury Road’ and it sounds like every synonym that applies to “epic”. The post-apocalyptic franchise returns after the last film hit theaters 30 years ago with a new leading man (the VERY MAD Tom Hardy) and a setting that gives zero F-words to the original timeline. However, it’s directed by George Miller, who created this mad world, so any worry of integrity and fears of Hollywood reboots can be set aside.

Here, we are going to focus on the CRAZIES in pro sports. Not necessarily the guys you would qualify as “bad guys”, but more of the unhinged, whacky, screw-loose variety…And Monty Williams.

One more time for Monty Williams and the GREATEST GIF OF ALL TIME pic.twitter.com/YB4LG3wSmM

Just one home run away from the 400 club, a 4-time All-Star, an MVP runner-up in 2004, stats comparable to Dave Parker, Al Kaline, and Eddie Murray (according to Baseball Reference)…Adrian Beltre is all of these, but he’s also a ticking time bomb. It’s been thoroughly documented on that Beltre hates when people touch his head, yet his teammates and opponents continue to do it. If you ask me, he is one Elvis Andrus prank away form yelling “BELTRE SMASH!”

Bryce Harper is a hot item these days and likely will be for quite a while. He made it into our Mad Men of MLB list a month ago, but the home run “hair flip” keeps the momentum going. Not only is he hitting out of his mind (12 HRs, 31 RBIs, 1.119 OPS in 35 games), he’s challenging umpires to Thunderdome too…Okay not exactly, but bat flips and hair flips will get it done.

Russell. Is. Crazy.…And he’s crazy good. Had his team made the playoffs, Westbrook could and probably should have been the NBA’s MVP this season. He earned the NBA’s scoring title by averaging 28.1 points per game, recorded 11 triple-doubles, yet none of it mattered to him…

Russell Westbrook's full quote on what the scoring title means to him: pic.twitter.com/aiHOragF2h

On top of the accolades and establishing himself as not the Robin to Kevin Durant’s “Batman” (he’s more Superman, or a second Batman), he has no regard for his own safety…and it’s entertaining as hell.

This description comes from Boogie’s scouting report from Jonathan Wasserman before he was drafted from Kentucky in 2010.

“Cousins’ lack of maturity and mental focus is evident in his negative body language and lack of composure … He tends to lose his head, looking disinterested or frustrated if things don’t go his way. Also does not appear receptive to coaching, tuning out his coaches when they attempt to give him advice on the bench …”

Since then, the 5th overall pick has averaged a double-double with 18.9 points and 12.4 rebounds per game, was named an NBA All-Star this past season, and was a member of last summer’s FIBA Champion Team USA squad….and he’ll also be the “Blaster” to any of his teammates’ “Master”.

…and you don’t want to get in Boogie Blaster’s way.

When you get a FOX Sports camera basically dedicated to your every movement on the sidelines, you probably deserve a mention in this post…As the Dallas Cowboys continue the all-time worst PR roster this year, Dez Bryant remains a figure of intrigue while he accepts the team’s franchise tag. Bryant was the center of rumors that seemed to gain steam in the winter regarding a video that was said to have made Ray Rice look like a choir boy. It remained just a rumor though…Bryant hasn’t signed his tender yet but once he does, the Cowboys sidelines will remain much anticipated theater.

Martellus Bennett is a different kind of cat, to say the least…He’s not demonstrative like Bryant, but he certainly is out there. It’s very cool how in-touch he is with his creative side. He’s into animation, writing children’s stories and challenges his Twitter following to open their imaginations…That odd side doesn’t necessarily translate to the field, but more so off the field in front of the local media. When he was first introduced to Chicago after signing his current contract, he asked to be referred to as “The Black Unicorn”, the “Orange Dinosaur”, and “Martysaurus Rex”…But don’t mistake his fun and soft side as weakness, Rookies…

Really you could apply this post to EVERYONE in the NHL. Guys pull their teeth out during games just to get comfortable. Fighting is legal. Reporters on the ice get hit with pucks, bleed, and shake it off to keep doing their jobs…

In anticipation of the Western Conference Finals coming up, we’ll go with the scrappiest (and craziest) guy you’ll see on the ice, Andrew Shaw. The 5’11, 23 year-old forward isn’t afraid to mix it up with anyone, anywhere…even from the bench. The fact that he sold his bloody stitches from the last Stanley Cup Finals he won for charity should be enough to qualify him as Fury Road material.

If the Mad Max franchise has provided anything, it’s a litany of freaks and things of the unimaginable. Fury Road sounds no different, so why not include the NHL’s most impressive circus attraction…Zdeno Chara. Chara is 6’9 without skates and carries a very heavy stick, but apparently the Slovak skater also grew up in a castle that housed history’s most infamous female serial killer. So there’s THAT the next time Chara comes barreling into you on skates.

Who else belongs in Mad Max: Fury Road? Going to see the movie this weekend? Lets talk about it on Twitter @Mike_PiFF03.

One thought on “Sports Crazies: Who Belongs in ‘Mad Max: Fury Road’?”