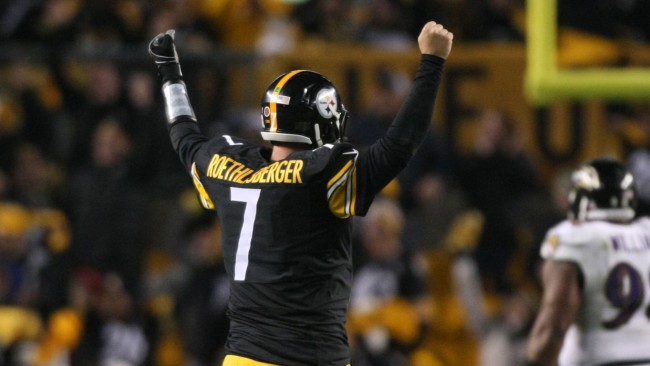 I owe you an apology.

Last week I was asked if I would pick up Big Ben or Alex Smith to start with Tony Romo being out. I went with Alex Smith and felt pretty good about it.

“In 10 games against Baltimore, Roethlisberger has only thrown more than one touchdown twice. The Ravens have also allowed the fewest passing touchdowns this season, less than 1 per game…”

And with Alex Smith pulling plays like this off…

I felt even better about the advice I gave.

For the second week in a row, Roethlisberger threw 6 touchdown passes and added 340 yards with it. He also has a fantastic matchup this week against the Jets pass defense. So for anyone who took my advice and lost with without Big Ben’s 6 TDs…

I don’t blame you. Derek Carr has only had one really bad game in his last 4 starts and is coming off a solid 194 yard 2 touchdown performance on the road against the Seahawks defense. The Broncos are also allowing 270 yards and 2 touchdowns passing per game, albeit with a lot of garbage time but still start worthy…I don’t trust Colin Kaepernick. I don’t trust the Saints defense much more but they did hold Cam Newton to just 151 yards passing and 40 yards rushing last week. The upside is higher with Kaepernick but he’s only thrown more than one touchdown twice all season…Go with your gut and start Carr.

Same game decision here and one I like this week. Both are going against tough defenses but one of them is getting Calvin Johnson back. Before Megatron went inactive, Matt Stafford averaged 281 yards per game. He suffered a lull but found his groove again with 299 and 325 yards back to back with 2 TDs in each game before the bye week…While Ryan Tannehill is coming off his best game of the season, he still has to face the stingiest defense against quarterbacks in terms of fantasy football. Go with Stafford with the Megatron bump. At the very least, Johnson will draw double coverage to open things up for Golden Tate again.

After just two weeks in the Jets system, Percy Harvin has established himself as the focal point in their passing game. He was targeted 13 times (second most in the NFL week 9) for 11 receptions last week (most in the league). With the Steelers offense rolling right now, have to think the Jets will be busy playing catchup which benefits Harvin, but not Chris Ivory. I would also go with Roddy White against one of the worst pass defenses in the league, Tampa Bay.

Charles Sims looks like he’ll be making his pro debut this week, but I wouldn’t expect that big of a work load for him yet. Bobby Rainey is the feature back in Tampa, but the bigger concern to me is Josh McCown getting the start. That thing didn’t work the first time this season, and I’m puzzled as to why Lovie Smith wants to go back to it again. Turnovers and a lack of possession time with McCown under center doesn’t help Sims’s cause early on.

If you have a healthy AJ Green, you start him. I would actually say yes to starting Mohamed Sanu this week against a bad Browns pass defense, but Golden Tate has been too good to keep out of the lineup. Yes, Calvin is going to take targets away from Tate but he is averaging 10 yards per target and is second among receivers after the catch. As I mentioned before, Megatron back in the lineup helps Tate more than hurts him.

There is really one big IF involved with this. If Tony Romo plays this weekend, play Jason Witten. Even injured, Witten becomes the possession for Romo in shorter routes and the Jaguars have allowed the 7th most yards to tight ends this season..If Romo is out, play Travis Kelce. Kelce is more of a red zone target in the Chiefs system, but he has a touchdown in 4 of his last 6 games.

I like Sammy Watkins and Alshon Jeffery in this group and I’ll tell you why…Kyle Orton has put Watkins over the top fantasy-wise since joining the Bills. He’s the clear #1 receiver and is the only WR getting thrown to from 5 yards in. Keep an eye on the groin injury though and go with Kelvin Benjamin in case Watkins doesn’t start…Jeffery seems to have been quiet for a lot of the season, but realistically has scored or gained over 100 yards in 5 of his last 6 games. The Packers secondary is beat up with Sam Shields and Morgan Burnett dealing with injuries. There also seems to be a “now or never” feeling with the Bears offense this weekend. Going against a Packers defense that has allowed the most red zone touches to wide receivers bodes well.

And last but not least, it’s #NationalNachoDay. So go crazy kids.