The 44th President of the United States LOVES his sports. He is an unapologetic Chicago White Sox fan. He fills out March Madness brackets for both Men and Women’s tournaments on SportsCenter each year. He also has no problem mixing it up on the White House basketball court. 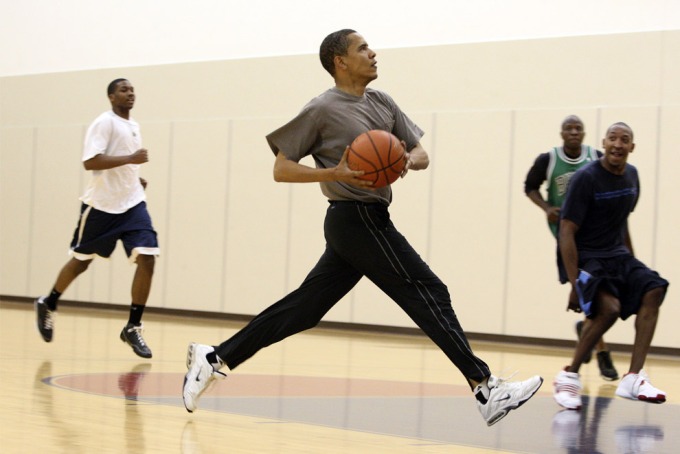 So on his 54th birthday, lets put the partisan blah blah blah on the back-burner and appreciate something we all enjoy…Sports.

I look forward to the President’s annual segment on ESPN where he joins the rest of the nation in the Madness. Since he was elected, President Obama is interviewed by college basketball reporter Andy Katz from the White House to talk out each of his picks. Last year he took regular season undefeated favorite Kentucky to win it all (like many of you did) over Nova, and was obviously incorrect as Duke beat Wisconsin in the National Championship.

President Obama finished in ESPN’s 72.9 percentile in 2014 and was most successful in 2011 with a bracket in the 87.4%. Both years, UConn won the National Championship and he didn’t pick them. The President did choose a National Champion for his first year in office, North Carolina in 2009.

ESPN isn’t the only network who gets to share air-time with the Commander in Chief as one of CBS’s best color analysts, Clark Kellogg, took him on in a game of HORSE…err POTUS.

I don’t even want to know what would’ve happen if the President got skunked.

He Loves His Chicago Teams

Despite referring to his White Sox’s home stadium as “Kaminskey Field” early in his first term, the President has never wavered as a Chicago die hard. When the Bulls re-signed All-Star Jimmy Butler to a longterm deal, he was on it…

Before the Blackhawks hit the ice for Game 6, President Obama was leading the chants from Twitter…

And wore his lucky hockey sweater while doing so.

Hey, @NHLBlackhawks! @POTUS and @RepMikeQuigley are fired up for Game 3 tonight. pic.twitter.com/ngbfVoDQ6k

While touring Cooperstown a year ago, the President asked to try on the White Sox World Series ring.

…and then donated the Sox jacket he wore to throw out the first pitch at the 2009 All-Star Game to the Baseball Hall of Fame.

The President even hosted a White House visit for the Super Bowl winning 1985 Bears team, because they never got the chance to do so before. 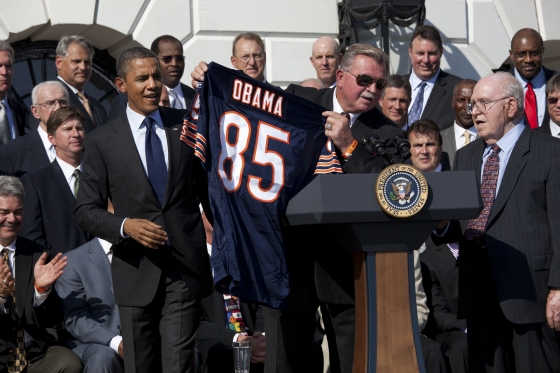 The ’85 Bears and the Blackhawks may be the only Chicago teams that the President has hosted at 1600 Pennsylvania Avenue, but he always seems to get a quick shoutout in for his favorite squads when he hosts other teams.

White House Host with the Most

We all remember the drama surrounding Red Sox DH David Ortiz’s selfie with the President and the handful of athletes who make a thing out of not going to visit the White House, despite it being a once-in-a-lifetime opportunity (looking at you, Tim Thomas)…

But damn, do those photo ops turn out great.