Before we get into the meaningful and important information you are dying for in order to set your lineup, can we enjoy the worst play call in the history of football once more?

The Colts have become an easy target as of late, especially on this site, but you can’t help but ask “How did you think this was going to go?”. Fortunately, the internet blessed us with a fantastic TECMO reenactment for us to watch over and over again.

Of course Bill Belichick’s Patriots are no stranger to teams acting a fool against them. For #ThrowBackThursday, they recalled another great football folly that their opponent this weekend (and Mark Sanchez) will never forget. 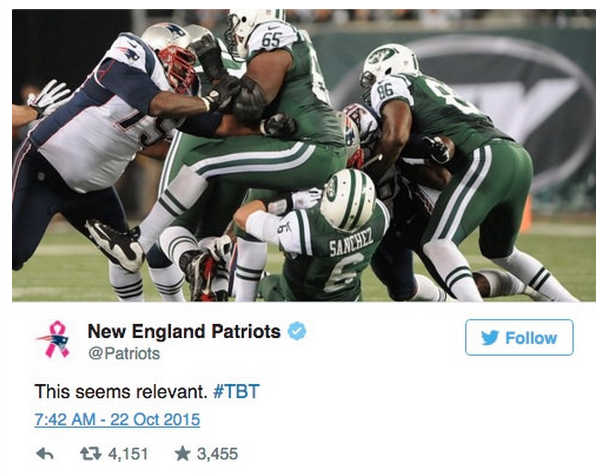 I plan to rock that hashtag throughout the Jaguars/Bills games in London this weekend, but that’s not why you called…

#BortleKombat has been on full assault the past two weeks as Blake has thrown 7 touchdowns and 4 picks in that time. His matchup this weekend is pretty sexy this week as he takes on Rexy (see what I did there) and his Bills defense. The Allens (Robinson and Hurns) are are licking their chops over facing a secondary that has given up the 3rd most passing touchdowns this season…However, everything is coming up Breesus as the King of the Drews is finding comfort in tight end Ben Watson and the downfield tandem of Willie Snead and Brandin Cooks. What’s worse than the Bills pass defense? The Colts pass defense. They have given up 300+ pass yards for the past 4 weeks and Vontae Davis can’t cover everyone.

When Andre Johnson went to Indy, I was pumped to see how he would with a real quarterback. Unfortunately, he looks like an old school tight-end in an Andre Johnson jersey. Unless you can handcuff him in a trade, Johnson’s value is simply for dropping in order to pickup a more useful player.

I am assuming you are the one picking up Forte and Lewis, and if that’s the case…DO IT! People have stashed Dez Bryant hoping he’ll come back and tear things up again. I doubt Bryant returns this week, but he isn’t too far away. Until Tony Romo returns, I’m concerned about who is throwing him the ball. Dez will catch anything that’s thrown within 5 feet of him though…Matt Forte and Dion Lewis down the stretch are a hell of a starting RB combo. If Team 1 has Marshawn Lynch and Chris Ivory already, I understand them making the deal. I don’t see a loser, but Team 2 is getting the better value heads-up.

Anyone who asks me about starting Antonio Brown will get this from me.

Big Ben is practicing and his status is questionable. Yes, I’m saying there’s a chance…Regardless though, Landry Jones proved he can sling it last week. Brown is arguably the best football playing in the sport. Despite some weird weeks lacking targets, you have to play him. Both Roethlisberger and Jones will target him and should do so.

I like Dion Lewis a lot, but not this week against the Jets. On the other sideline, I love Chris Ivory. His aggressive running has helped set up the surprisingly efficient passing game for New York. He also has the 3rd most rushing yards in the league at this point.

Stefon Diggs has been a sexy waiver name this week and rightfully so. Finally, someone not named Adrian Peterson is producing for the Vikings and he has a nice matchup going against a Lions defense that even let Marquise Wilson of the Bears blow by them last week. I like Robert Woods, but I’m very skeptical of EJ Manuel throwing as opposed to him running. Prioritize Diggs > Woods.

This is now a weekly question with you, and I’m okay with that…Anywho, you have one more week with Pierre Garcon as a #1 wideout, as it looks like DeSean Jackson is a week away from returning. Go ahead and start Garcon as Jordan Matthews has a rough matchup against Carolina this week.

Melvin Gordon is such a tough read because you don’t know if the Chargers even want to run at this time with their banged up offensive line. At least I know he’s getting the ball. If it was a PPR league, I would recommend The Duke, but he’s only used in passing down situations and is now sharing a backfield with not only Isaiah Crowell but Robert Turbin as well. The only thing I trust from the Browns against the Rams offense is Gary Barnidge in the end zone. Go with Gordon.

I, like you, also picked up Christine Michael to have stashed and I’m also going to wait a week to see how the Cowboys use him. A young athletic back behind that Cowboys offensive line should be great, but your combo of Bell and Murray makes him more of a luxury than a necessity. He’s too unknown on the field to confidently trot him out. Going against the Giants is a nice measuring stick though.