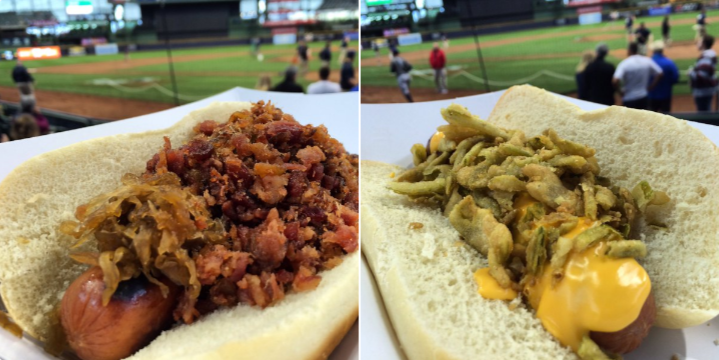 Saturday, I took the trip from Chicago up I-94 to take in some baseball, beer and delicious encased meats. Celebrating my dad’s birthday a little early, we made a day pairing the Lakefront Brewery with Milwaukee baseball. Very thankful the fine people at the Brewers shared this so I knew what to look forward to before getting to Miller Park. 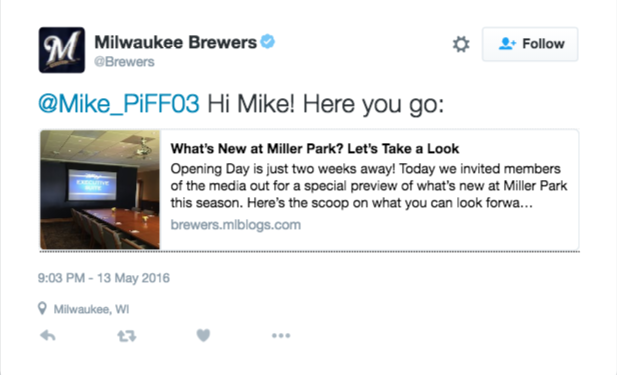 Getting to Miller Park early is a fun experience. There’s tailgating, bags, grilling and every Wisconsin team logo present. Even in 30 degree temps, there’s a pretty solid party raging. Under the dome is a different kind of party though, and way more than the mid-game Sausage Race that you’ve heard so much about… 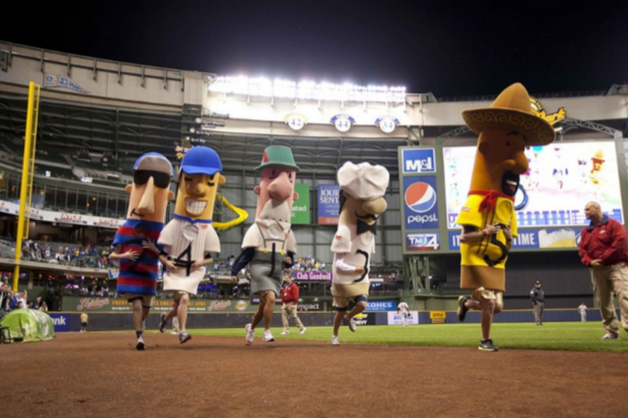 During batting practice, I took the opportunity to walk the 100-level concourse, engulfing myself in the smells of ‘Stormin Gorman’ pulled pork sandwiches, Banh Mi brats (with asian slaw and cilantro lime mayo), and assorted sugar-coated, roasted nuts.

On the 200-level, toward right field, I was directed to the “Brat Boys” concession stand where the real fun was… With homemade beer jam, sauerkraut and a big pile of bacon. 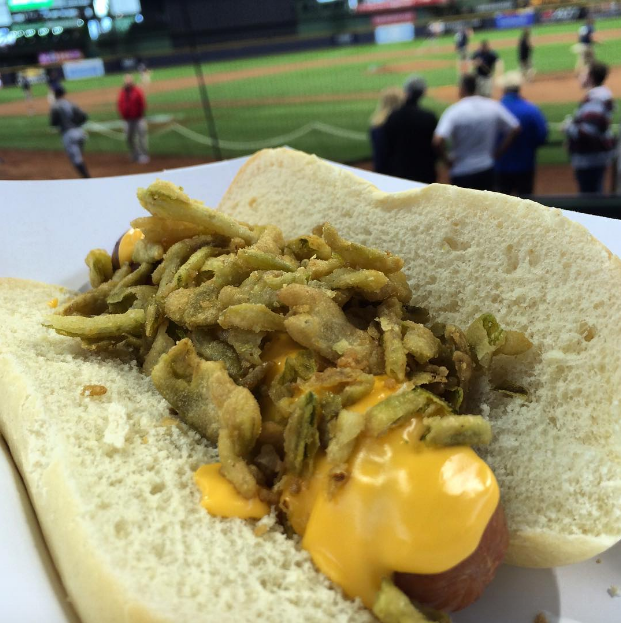 If you crave something sweet, I highly recommend heading toward right field on the 100-level concourse and finding the bright green “Hoely Moley” Doughtnut + Frozen Custard Sandwich stand.

There are a litany of topping options, like pecan pie pieces, peanut butter, Nutella, and more. I went with the first choice on the board though. Thank you for the good time, Milwaukee. I will certainly be back to explore some more this summer. 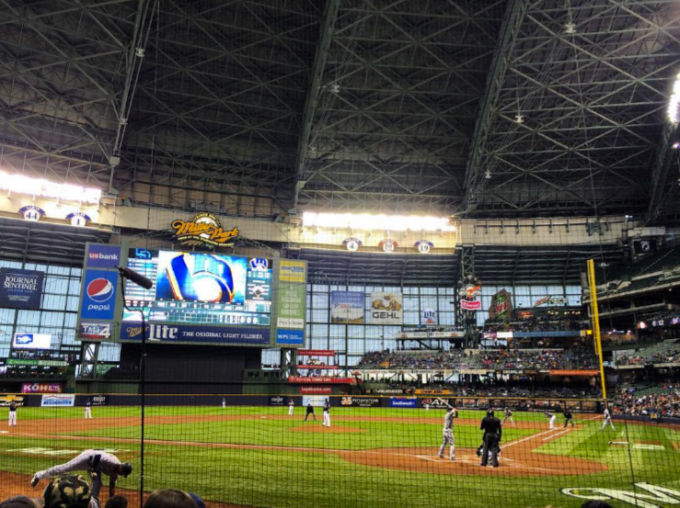 First off, Happy Valentine’s Weekend to you.

Whether you have a hot date, reservations at a fancy sit down joint, or marathon RomComs with a pint of Ben & Jerry’s, at least you have plans. Regardless of your relationship status on Facebook (or how complicated it may or may not be), at least food won’t break your heart…so to speak. Everything tastes better with a fun theme too.

As you know, we have an appreciation for both doughnuts and pizza here. You can start your day with one and end it with the other, making it great day at that. This weekend you can eat something that represents your love for food, but let’s see which one you love more.

Do-Rite Donuts in Chicago and other shops will have these available all weekend.

Limited edition Valentine's donuts are on the shelf this weekend. While they last! #showsomedonutlove pic.twitter.com/qgCItLlQLt

(Actually, a box of doughnuts sounds better than just chocolates.)

Lou Malnati’sand other pizza places will be making pies like these to fix your craving.

Share the love this #ValentinesDay – give your sweetheart a heart-shaped deep dish #pizza! #thatsamore pic.twitter.com/IkQJgWePEj

There isn’t a wrong choice, and really you’d be better off having both, but which makes your heart jump first: 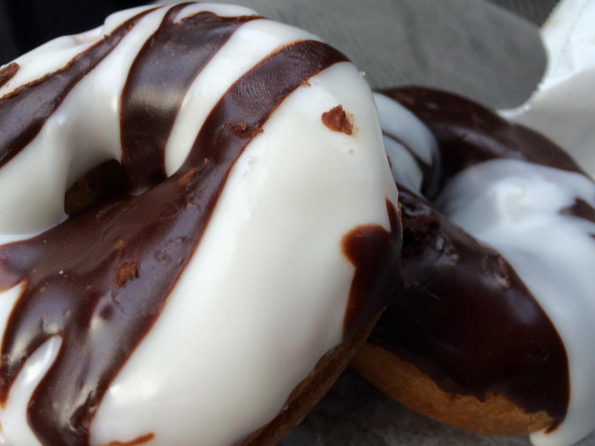 #DoughnutFriday started out as an office tradition I had with coworkers in the Sun-Times building over a year ago. Every week, someone else took it up themselves to impress the rest of us with their awesome doughnut spot that nobody had tried before. I would get geeked about the opportunity when it came to my turn because I LOVED sharing the doughnuts I grew up with and making new people understand why.

2016 started on a Friday and I thought this could be a fun tradition to expand upon and an opportunity to connect with doughnut lovers everywhere. Every Friday this year, I want to try a new doughnut shop and would encourage others to do the same. You can either recommend new spots for me to try (and I will) or just share a photo from the shop you’re trying yourself on either Facebook or Twitter. At the end of each month, I’ll post here about all different places I tried as well as any photos you share with me…Could be a good bit of fun.

This month’s #DoughnutFriday features are all pretty close to home for me in the Northwest Suburbs of Chicago, but I’ll begin making the rounds to different areas starting in February. Please complain sometimes about not being able to order breakfast for delivery. Guess what? EggShells delivers! The semi-cramped layout of the place adds to the charm. The bagels and lunch sandwiches are delicious as well. 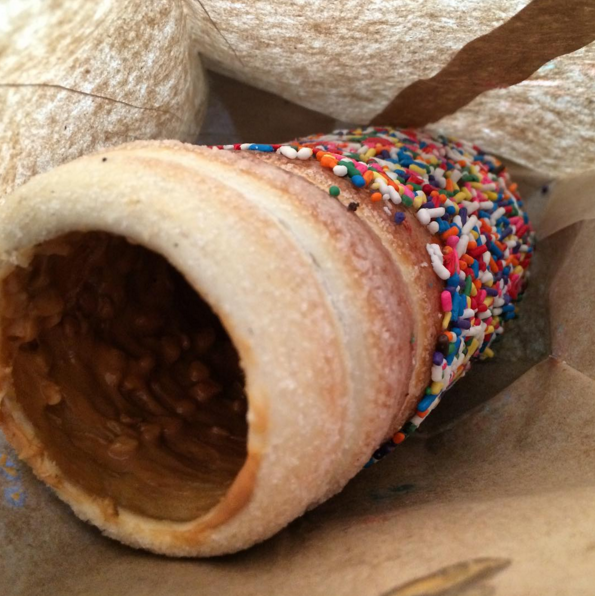 This was a fun new discovery in Barrington. They make their Kurtos (Hungarian Doughnuts), also known as “chimney cakes”, fresh as you order them, and fill them with your choice of peanut butter or Nutella. It’s fantastic. They also serve other pastries, sandwiches, soup, coffee and dessert drinks. Yes, it’s primarily a chocolate shop, but the doughnuts are excellent as well. It’s also one of the few places in the area that serves cider doughnuts. If you grew up around here, you’ll feel nostalgic for the Orchards in Lake Zurich or the apple cider shop in Long Grove. One of the best doughnut shops in the area. There’s a new location in Arlington Heights, if you so happen to live that way. Always fresh, always delicious. I’m partial to the honey dipped doughnuts, but you really can’t go wrong. Also an awesome choice for Paczki Day! 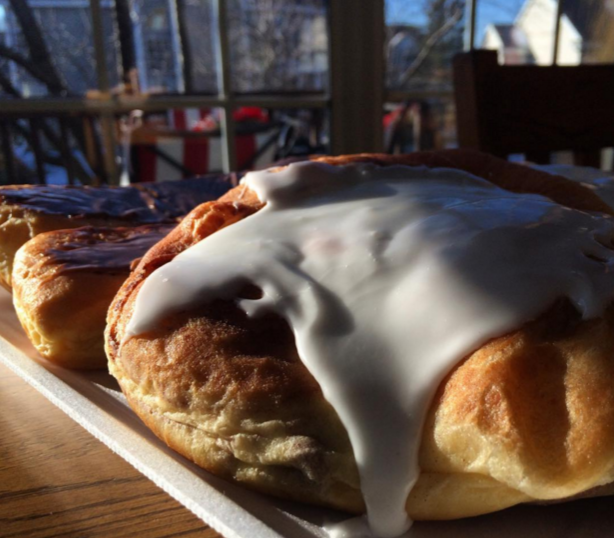 So those doughnuts I mentioned earlier that I was excited to make my coworkers believers for…these are them. That big soft gooey looking thing is called a “Big Cin” and it’s a totally different level of cinnamon roll. The long johns are top notch and there’s plenty of other options as well.