We all have that friend from Texas that’s never too shy to say, “You don’t know what REAL barbecue is.” Since winning the 2015 Masters at Augusta National, Jordan Spieth has been that friend.

The Champions Dinner tradition began in 1952, when Ben Hogan suggested and hosted it. Each year, the winners of the Masters get together on Tuesday night before the tournament. It’s setup to welcome the winner from the previous year to their exclusive club of champions, which is officially known as The Masters Club. The previous year’s winner then selects the menu for the evening and also pays for it as well. You can do that after cashing the giant checks at the giant check bank.

Here’s what Spieth’s menu looked like for the evening. 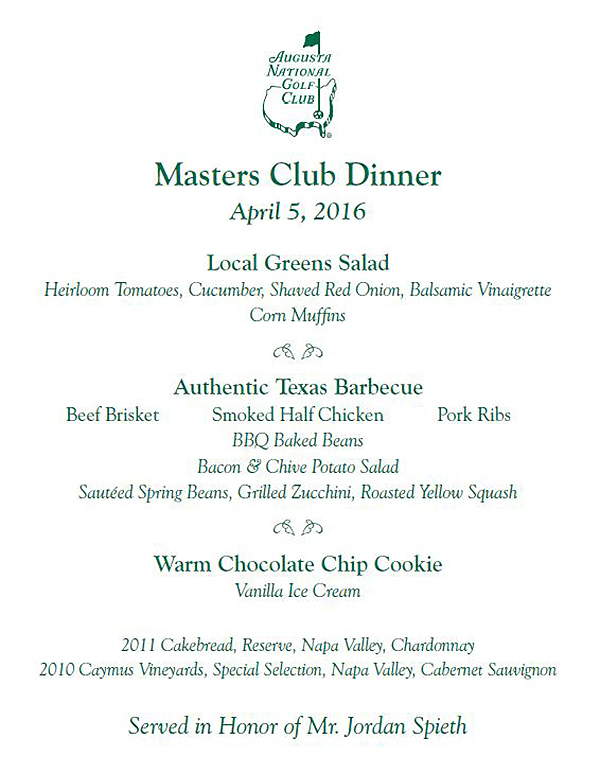 It was the first time the group had Texas barbecue since Spieth’s fellow Longhorn, Ben Crenshaw, hosted in 1996. Apparently the meal went over well, according to Tiger Woods.

After Woods won his first Masters, he treated the champions in 1998 to cheeseburgers, chicken sandwiches, french fries and milkshakes. After both of his wins, Bubba Watson had an entree of grilled chicken breast with sides of green beans, mashed potatoes, corn, macaroni and cheese, served with cornbread, and a dessert of confetti cake and vanilla ice cream.

Competition for the next green jacket (and next year’s menu) begins Thursday, April 7th.

If you won The Masters, what would you have served at the Champions Dinner? Let us know on Facebook and Twitter!