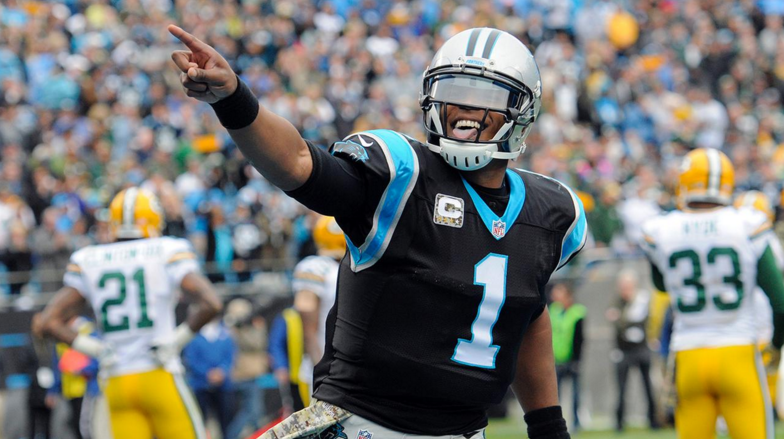 Last week was quite the 4-touchdown party for quarterbacks and their fantasy owners. Marcus Mariota did his best “Breesus” impression with 4 touchdown passes against the awful New Orleans pass defense. Derek Carr went Air-Oakland, with the help of Michael Crabtree and Amari Cooper, with 4 TDs and 301 yards in a losing effort to Pittsburgh. Then the tables were turned for Aaron Rodgers, as he had to throw 4 TDs to keep pace with Cam Newton and his 4 total touchdowns (3 passing, 1 rushing).

A week ago, Cam Newton was being compared to Colin Kaepernik by their stats and win loss record.

As we all know, the big difference between the two is the record. For fantasy owners, it’s also the touchdowns and rush yards. Before the season started, people avoided Newton in their drafts like the plague after his #1 receiver, Kelvin Benjamin, was ruled out for the year with an ACL injury. If you were like me (perhaps drafted Peyton Manning and traded him for Tony Romo after Week 1), you are so glad Newton was available on waivers even after Week 2.

Despite throwing interceptions in 6 of his 8 games, Newton has thrown multiple touchdowns in 5 of them and has added 5 rushing touchdowns as well. This week, Newton can keep things rolling against a Titans defense missing their top 2 corners.

I feel this deserves some public attention, since Craig has tried to pull this a few times now. What are your thoughts on someone asking their opponent for Fantasy advice the same week they play them?

Nice save. TJ Yeldon is an easy pick for me. He has a touchdown or 100+ rushing yards in 4 straight games and Baltimore’s defense is a tire fire right now.

Patriots running backs not named “LeGarrette Blount” are too much of a gamble for me at this point. You’re left wondering who will get Dion Lewis’s touchdowns, especially in the red zone. James White had the opportunity in this situation before and squandered it. Brandon Bolden did get a receiving touchdown a week ago, and has more experience with Bill Belichick. Brandon LaFell finally had a nice game a week ago with 102 yards, but I still feel better about Edelman, Gronk and Danny Amendola before him.

Sure, you’ve got back-to-back weeks of 300 yard games from Ryan Tannehill…but he hasn’t thrown a single touchdown pass in either of those games. Derek Carr is also coming off of back-to-back 300 yard games, but has 8 touchdowns to show for it. The Vikings are the best pass defense on the road, but matchups don’t really worry me after Carr lit up the Jets too weeks ago for 333 yards and 4 touchdowns.

The return yards makes Ted Ginn Jr. a start for me in this group. Ameer Abdullah is swiftly fading away with the rest of the Lions backfield. Then I’m left with a choice between Martavis Bryant and Danny Amendola…Ben Roethlisberger or not, Bryant’s chances to score are a lot better than Amendola’s based on the receiving groups alone. If Antonio Brown isn’t getting the ball thrown up to him, Bryant is. Amendola has to share balls with Edelman, Gronk, LaFell, a second no-name tight end (probably, and whoever fills in for Lewis. Bryant is better bet.

You’re right about Sammy Watkins, and I also don’t like him against Darrelle Revis in primetime.

If Allen Hurns is healthy, play him. #BORTLEKOMBAT is going to have flawless victories against the Baltimore secondary all day. Then you’re left with two Kansas City players against the best defense in football. In this situation, I go with the running back who is guaranteed touches. If the Chiefs offense has any chance at production against the Broncos, it’s going to be Charcandrick West trying to impersonate Jamaal Charles in Week 2 (125 rush yards, 1 TD).

QB – Yeah…ouch. I feel for Marcus Mariota’s wellbeing against the Panthers. You will get plenty of volume out of Brian Hoyer though. Bill O’Brien still hates his run game without Arian Foster, which has turned into a chuck fest for the Texans offense that’s usually playing from behind. You also have to feel better about DeAndre Hopkins and Nate Washington catching passes over the whoever is doing it in Tennessee.

WR – Now that James Starks is officially the starting RB, you have to play him. The Lions have given up the most rushing touchdowns in the league.