In 3 less games played, Le’Veon Bell is just 98 yards behind Ezekiel Elliott for being the league leader in yardage. He’s actually leading league in yards-from-scrimmage on a per-game basis and it’s not even close. And be honest…he totally won your Week 14 single-handedly, right? He is the only player to ever out-gain an entire opposing team by himself. 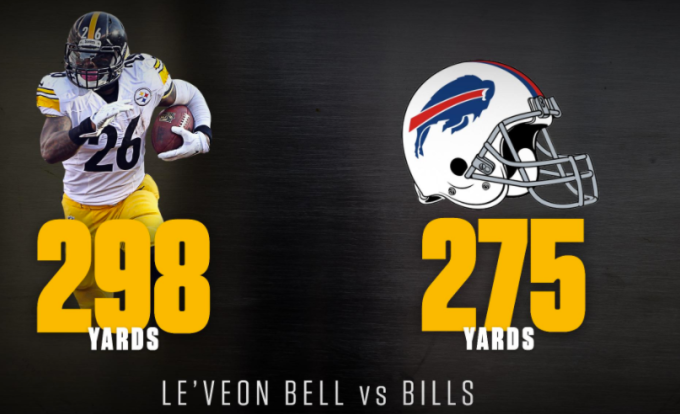 If you’ve got him, ride Le’Veon to your Fantasy League’s championship.

Seahawks defense, for starters. The Rams are team asking to get their butts whipped and that’s going to happen in Seattle.

QB – I answered this one for you a week ago and I think it’s safe to stand pat on Carson Palmer. The last time he played the Saints, he lit them up for 307 yards and 3 TDs. That game also has a lot of potential to be a high-scoring affair.

TE – Tough call, as both TEs are playing tough matchups. However, Delanie Walker is the one who has a better nose for the end zone and he’s gotten there in 3 of his last 4 road games.

I don’t trust Kenneth Farrow yet, but really like both Falcons RBs against the Niners. Did you see what Bilal Powell did to them? Go with Tevin Coleman.

QB – I don’t like either one, but I would take Russell over Alex – if those are your best options. I hate depending on a quarterback on Thursday night but I also wouldn’t let your playoff game be decided by Alex Smith.

FLEX – While I like the volume that Kyle Rudolph gets from Sam Bradford, Michael Crabtree is Derek Carr’s favorite target. He’s getting 9.5 looks over his last 4 games, compared to the 6.5 that Amari Cooper has.

Quoting Russell Crowe in Gladiator: “IS THERE NO ONE ELSE?!”

I’m seriously asking. I like D-Jax’s matchup better, but Golden Tate is averaging 6.5 catches in each of his last 5 games. Go with consistency.

DEF – Atlanta is facing a Niners offense that just doesn’t belong in professional football. They’ll get out to a big lead and force San Fran to press and turn the ball over.

WR – Tyreek Hill and Jamison Crowder. Reek has 5 TDs in his last 4 weeks (more than anyone over that span) and Crowder has the best matchup.

RB – Gotta go Mark Ingram for the fact that I do not trust Farrow enough to play him in a week this crucial yet.

WR – It’s weird even to consider not playing Julio, but here are you are waiting for him to play a 3:30 PM game. If you’re not willing to wait on him, roll with Sammy Watkins against Cleveland.

QB – I don’t like how limited Stafford looked last week, despite gutting out the win against my beloved Bears. Based on that, Dak Prescott is the safer play.