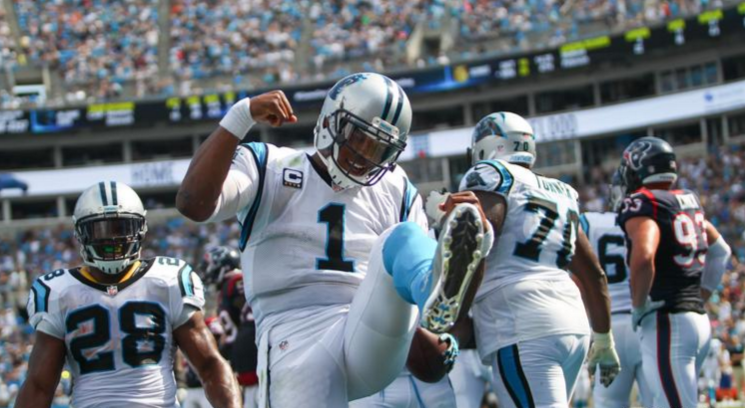 Not sure if you noticed, but the quarterback position in 2015 across the league got thin in a hurry. The fact that Brian Hoyer and Matt Hasselbeck were relevant was a HUGE problem.

Most of the quarterbacks below got the job done in 2015 and should be poised to do the same or more in 2016. Some, like Andrew Luck and Tony Romo, are looking for a healthy comeback.

(You’ll notice that Joe Flacco isn’t one of them. Year 2 of Marc Trestman’s play-calling and a lack of talent at wide receiver keeps him out of the Top 20)

I’ve harped on it here enough in the past 4 months, but Cam Newton was winning you multiple weeks in fantasy by himself in 2015. His 35 touchdown passes were tied for 2nd in the league…and then he added 10 more rushing. Newton also gets at least one more weapon next season with Kelvin Benjamin returning.

Tom Brady is just a year younger than Peyton Manning, yet led the league in touchdown passes a year ago. Brady also chipped in nearly 300 yards per game, and made the most out of depleted receiving group. Heck, he even made Scott Chandler relevant for a week or two.

Almost as reliable as Brady was Carson Palmer. He didn’t look great in the post season, but his loaded offense allowed him to average 291 yards and at least 2 touchdowns per game. Another healthy year like 2015 would warrant a much higher pick than where he was drafted on average a year ago.

Russell Wilson is weird. Yes for those reasons you just thought of, but also because of his streaky production. Through the first 10 weeks of the season in 2015, Wilson had just one game of multiple touchdown passes. Then he gave you 5 straight weeks of no less than 3 TDs per game. As the Seahawks look to probably move past Marshawn Lynch, it would be much more beneficial for them to let Wilson throw it and have Thomas Rawls compliment him.

There are a lot of people who probably don’t like me having Aaron Rodgers this far down the list, but the truth is that the discount-double check got checked down last season. Rodgers was a different player without his old-reliable Jordy Nelson and his running game wasn’t bailing him out either when he needed it. Yes, the 2 Hail Mary’s proved he can still do whatever he wants when it matters most, but you should be able to get him with better value in the 3rd or 4th round…as of now. 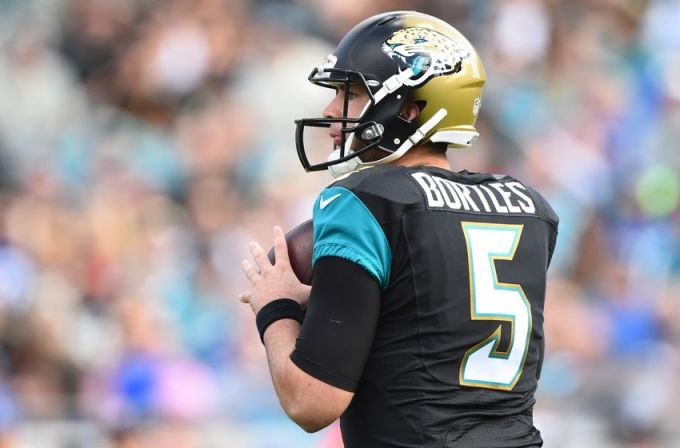 Blake Bortles jumped from throwing just 11 touchdown passes his rookie season to 35 in his sophomore year. #BortlesKombat has some room to grow, and probably will with a pair of very consistent scoring receivers like Allen Robinson and Allen Hurns. The Jaguars are a team that plays in a lot of comeback situations and shootouts that make Bortles excellent for Fantasy garbage points.

Ben Roethlisberger led the league with 328 pass yards per game, and you’d think it’s hard not to replicate that kind of production when you have Antonio Brown, Martavis Bryant, Markus Wheaton, Le’Veon Bell and DeAngelo Williams to work with. The only question is whether or not he can stay in one piece.

I’m always skeptic about Eli Manning, as he seems to regularly fold in high pressure situations during the regular season. His 35 touchdown passes were no joke though, and having Odell Beckham Jr. there to make him look better is also hard to argue with. As his offensive coordinator from the past 2 years takes over the reigns as head coach, the offense shouldn’t look terribly different. 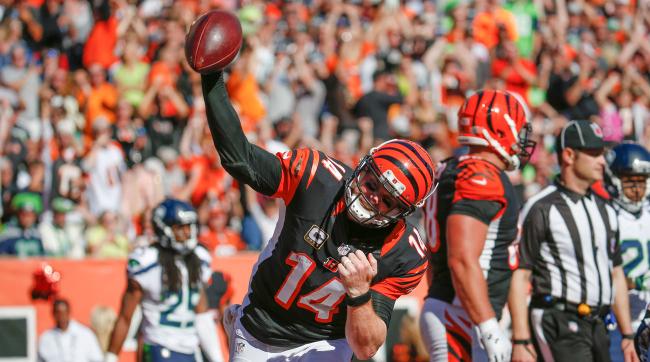 Andy Dalton was as good as anyone in the first half of the season last year. He likely went undrafted in most leagues and became the hottest free agent in a hurry in yours. He went from throwing 19 touchdowns and 17 interceptions in 2014 to 25/7 in 2015. Had he been healthy down the stretch for the Bengals, there’s a good chance they would have beaten the Steelers over Wild Card weekend. His offensive coordinator, Hue Jackson, might be elsewhere but it’s hard to imagine he’ll take a step back with AJ Green and Tyler Eifert still there to throw to. 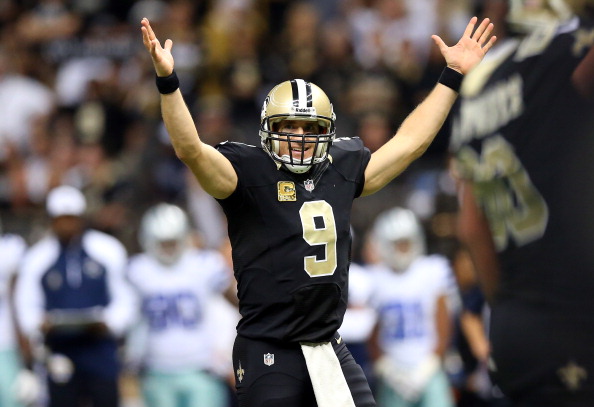 Drew Brees paired with Sean Payton as head coach will always get you the yardage. “Breesus” averaged 324 yards per game. The crazy numbers don’t kick in until around mid-season though, like ya know…7 touchdowns and 505 yards in Week 8. The fact Luke McCown made an appearance makes you nervous though and wonder if he can keep it up (NOT LIKE THAT, YA JERKS). 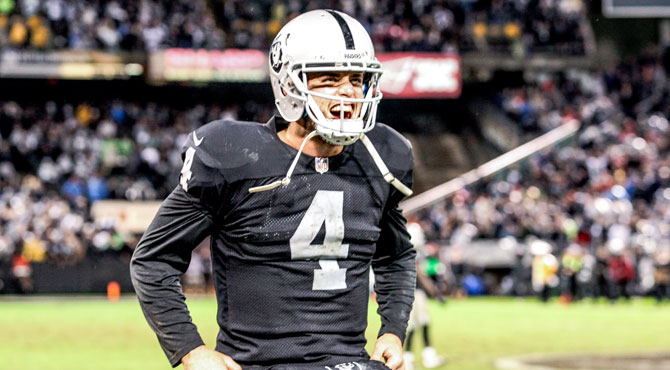 Derek Carr made solid strides in 2015, throwing multiple TDs in 11 of the 16 games he started. Throwing 32 touchdowns after 21 in his rookie season and growing with Amari Cooper makes his projection in 2016 even more exciting.

I don’t know which Kirk Cousins you’re going to get in 2016. The one that was just okay through Week 14, or the one that tossed 11 touchdowns in 3 games to will Washington to an NFC East title and will get him paid big time for it. The upside with a healthy Jordan Reed, and that 158.3 QB rating game in Week 10, has him ranked higher than he probably is….for now.

I don’t think there was a quarterback who did more with less than Jay Cutler.

Yet he still played one of his best seasons as a Chicago Bear. Having continuity in playcalling next year and healthy receivers makes me feel better about Cutler than most next season.

Andrew Luck probably went in the first or 2nd round in most leagues last year. Those who drafted him that high got 7 games, 15 touchdowns and 12 interceptions to show for it. As of this moment, I’m not sure if you’re going to get the 40 touchdown guy from 2014 or the injury plagued/turnover happy QB of 2016. His talent and ability will keep him higher though. 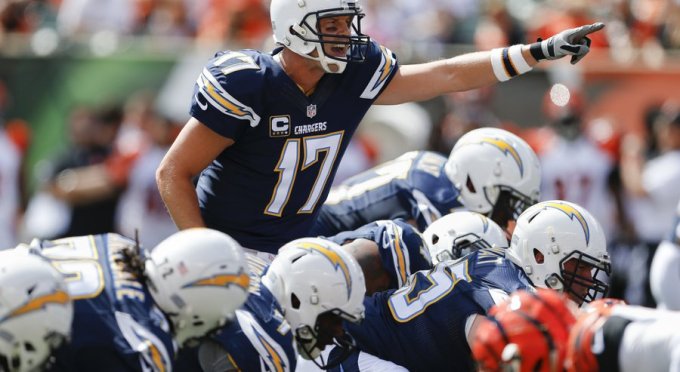 For the first 8 games of the season, Philip Rivers averaged 344 yards and 2 touchdowns per game. Then he lost Keenan Allen for the year and it was 254 yards and 1.4 touchdowns per game the rest of the year. Rivers still got paid big money and his head coach Mike McCoy was extended through 2017, so the organization seems to be banking on next year looking like the first half of 2015.

There’s been more talk about who will replace Tony Romo than his potential production when he returns in 2016. If you draft Romo next season, it’s to backup your #1 guy and the possibility he stays upright for 34 touchdowns like he did in 2014. If the Cowboys pick up a DeMarco Murray-like running back, maybe he will.

I don’t know how you can trust Matt Ryan anymore, coming off the worst statistical year of his career since his rookie season. However, he does have arguably the best wide receiver in football, Julio Jones, and Devonta Freeman can set him up better if his offensive coordinator can figure out how to use play-action.

Before last season, Ryan Tannehill was improving every season. Then his coaches forgot how to coach. It’s cliche now, but Adam Gase worked wonders with Peyton Manning and Jay Cutler. So you can hold onto hope one more year with Ryan Tannehill as a backup.

I get a feeling Jameis Winston is going to jump up this list a bit, and could very well be a starter for you if Mike Evans can avoid dropping the ball. What’s going to be key is seeing how his newly elevated head coach, Dirk Koetter, does handling the personnel after getting Lovie Smith launched.

Ryan Fitzpatrick brought the “Fitzmagic” last season, throwing more than 30 touchdowns for the first time in his career. The Jets utilized their running game to set him up greatly in the red zone, and the Brandon Marshall/Eric Decker combo ate because of it. Can you bank on Fitzpatrick doing it again though when couldn’t any of the 10 years before?

Anyone too high or too low? Was anyone left out? Let me know on Facebook or Twitter.