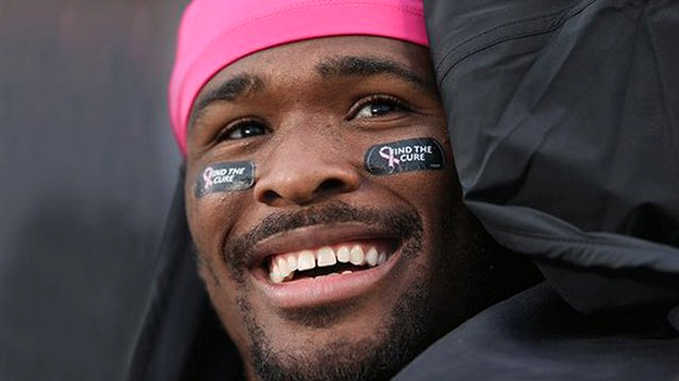 During a month commercially recognized as Breast Cancer Awareness Month, the NFL appears to be taking steps backwards in their efforts PR wise. The recent fines against Pittsburgh Steelers teammates Cam Heyward and DeAngelo Williams are becoming tougher to justify. Heyward was fined earlier this month for honoring his late father and former NFL player, Craig, with “Iron” and “Head” on his eye black. Williams was fined today for promoting Breast Cancer Awareness, but not in the way the NFL would allow it?

"We will find a cure" and the breast cancer ribbon were printed on DeAngelo Williams' eyeblack this month. The NFL just fined him $5757

Williams lost his mother to breast cancer a year ago and wished to honor her all season with pink in his weekly uniform. He asked the NFL and they rejected his request. Williams has been wearing the same message on his eye black for 5 years though, according to ESPN’s Jeremy Fowler.

The NFL has a penchant for weird timing when “setting a precedent” handing down punishments. After reducing Greg Hardy’s 10-game domestic violence suspension to 4 games, they elected to hand Tom Brady the same sentence for maybe deflating footballs (we know how that went). While trying to come back from dv backlash, Ray Rice, Adrian Peterson, Ray McDonald and Hardy all included, the NFL chose to also fine a third Steelers player for wearing purple cleats in honor of his mother, who was killed in an act domestic violence. William Gay was fined today $5,787 for his cleats, which he’s worn for the past two seasons. NFL.com actually ran a story just a year ago promoting Gay’s purple cleats.

The fines come off as petty because they are. October is widely regarded as both Breast Cancer and Domestic Violence month, thanks in part to NFL marketing. It seems like two players, who have both worn their own personal messages for their respective causes for years, are being fined because Heyward was punished first. All three cases are even tougher to justify when the league and its network partners promoted former Bengal Devon Still’s “Leah Strong” campaign for his daughter and never fined him for wearing his eye black. Still pointed this out himself after hearing about Heyward’s fine.

This past weekend, Heyward wore eye black again with “Tackle Cancer” written because the NFL sanctioned that specific message for players to use. He won’t be fined for it. So now it’s okay to promote a message toward a cause as long as it’s consistent with your organization’s marketing?

While the NFL is enforcing this storm trooper uniform culture, we are still talking about the causes that Williams, Gay and Heyward were hoping to raise general awareness for. In a sense, that honors the memories of their parents who suffered but at the expense of the NFL looking like an evil empire. What’s the point? No, it doesn’t hurt the NFL’s popularity. Yes, I’m still going to take Fantasy Football questions later today for tomorrow’s Mailbag. I’m still going to watch on Sunday with the millions of others wearing NFL products. And so will you. However, you and I both will add this to the long list of issues the NFL has proven to be inconsistent and insensitive with.