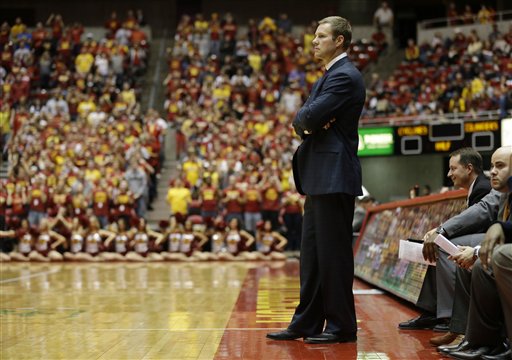 Former Iowa State head coach Fred Hoiberg has agreed to become the 22nd head coach the of the Chicago Bulls. The Bulls will hold a presser and officially name him coach Tuesday at 2 PM CT. Adrian Wojnarowski of Yahoo Sports is reporting that the deal is worth $25 million for 5 years.

It was the worst kept secret in Chicago sports as rumblings of the likely change started around All-Star weekend earlier this year. Hoiberg leaves Iowa State coming off of a shocking Round of 64 exit in the NCAA tournament but also a 115-56 record over 5 seasons.

Bulls fans who hung tight during the post-Jordan/pre-Rose era are aware of Hoiberg’s time with the team as a player. From 1999-2003, Hoiberg was the veteran presence with young (and bad) Bulls rosters that featured draft picks like Elton Brand, Ron Artest, Marcus Fizer, Eddy Curry and Tyson Chandler. He rarely started but he gave his teams points off the bench, averaging 10.1 points per 36 minutes with the Bulls. The Bulls head coach then, Tim Floyd, also coached Hoiberg his senior year at Iowa State in 1994…the season in which Hoiberg was named an All-American.

Hoiberg takes over a Bulls team that was 255-139 over 5 seasons in the regular season under Tom Thibodeau. Thibodeau earned the NBA’s Coach of the Year Award in 2010-11, his rookie coaching year. At that time, the Bulls were a much younger team. Derrick Rose was the league’s youngest MVP that 2010-11 season while Joakim Noah missed almost half the year, but played all 16 games they competed in the playoffs.

Thibodeau created the “try-hard” persona for his Bulls teams. Despite being without Rose for virtually 2 full seasons and then some, the Bulls played like Eastern conference contenders each year based on the principals of relentless defense and grinding out wins every night. That helped make Luol Deng, Noah, and Jimmy Butler become All-Stars. It also got backup point guards like John Lucas III, Nate Robinson and DJ Augustin paid after each season. The Bulls made the playoffs in each of Thibodeau’s 5 years. So why the change?

While the Bulls had a .647 win percentage in the regular season under Thibodeau, they also had a .451 win percentage in the playoffs. That is the key stat in the argument for firing Thibodeau. Yes, his win percentage was second all-time in Bulls history to Phil Jackson’s. If you’re familiar with the organization’s history before Jackson and even Michael Jordan, you’d know that “2nd best” isn’t saying a lot. And while Thibodeau’s teams won a lot of games during the regular season, his players were burnt out and limping into the playoffs. Butler wasn’t even playing meaningful minutes until Deng was hurt and feeling the effects of leading the league in minutes per game (39.05 per from 2011-13). Butler led the league in minutes per game last year and has averaged 38.7 each of the last 2 seasons.

After a first round exit to the Washington Wizards in the 2014 playoffs, where the Bulls appeared to no longer have their legs or any scoring ability, the front office chose to take the team in another direction. They signed scoring big man Pau Gasol, brought stretch-forward and 2011 draft pick Nikola Mirotic over from Europe, and traded assets to draft 4th all-time leading NCAA scorer Doug McDermott at #11 overall. Vice President of Basketball Operations John Paxson and General Manager Gar Forman stopped building the roster around Rose and added more scoring. The scoring improved from 93.7 points per game in 2013-14 (worst in the league) to 100.8 ppg. in 2014-15 (15th out of 30 teams). However, Thibodeau refused to play McDermott (even in blowout games) and clashed with management over minutes restrictions that were put in place to avoid the annual limp into the playoffs. Even with a healthy roster, Derrick Rose in one pice, and the Cleveland Cavaliers without Kevin Love and Kyrie Irving, the Bulls were still knocked out of the playoffs in 6 games.

The 21 point loss in Game 6 to Cleveland was more than indicative of a team needing a change. Thibodeau refused to call timeouts when Cleveland would go on their multiple 7+ minute runs during the 2nd and 3rd quarters. The Bulls reverted to standing and staring while Butler attempted a “my turn” style of offense, which Thibodeau simply allowed. Rather than sub in forwards to help with inside scoring, Thibodeau played Kirk Hinrich. And the team quit in the most important game of Thibodeau’s tenure. If you saw it another way, I’m not sure what game you were watching.

What Hoiberg brings is an innovative offense that consistently gets players open. If your #1 option is being double teamed, two other options become open moving off the ball. 5 of Hoiberg’s Iowa State players averaged double figures in scoring last season, in one college basketball’s best conferences. Hoiberg is a players coach with a reputation for managing relationships well, both from his coaching and playing career.

While Thibodeau’s grinder and “try-hard” philosophy won games, it worked better when the roster was younger. The Bulls are a veteran roster and built to win now in a bad Eastern Conference. A loose atmosphere and emphasis on scoring has proven to work, as we have seen with Steve Kerr taking over for the Golden State Warriors. Rose and Butler aren’t the same kind of players as Stephen Curry and Klay Thompson, but the rest of the roster benefitted greatly with the transition from Mark Jackson to Kerr.

Thibodeau had an opportunity to prove he could change his style with an older and more offense-oriented roster. There were comparisons being made to Gregg Popovich and his veteran squads that benefitted from rest and the use of the team’s depth. Instead, Thibodeau exhibited a reluctance to adjust and a petulance toward the front office that was trying to help him win.

Neither Paxson nor Forman are blame-free though. Besides acting immature about letting Thibodeau go, the organization hasn’t won anything since Michael Jordan under their watch. Hoiberg is their 4th head coach and really their last chance. When the chairman of the board, Jerry Reinsdorf, feels a need to help put the nail in the coffin with a coach’s exit, you have to think there is more to Thibodeau’s dismissal than what we know…but don’t think for a second that Paxson and Forman aren’t on hot seats.

It will be interesting to see where Thibodeau lands. Depending on whether the Cavs win the finals, he could be coaching LeBron James next season. Byron Scott isn’t safe in Los Angeles and Kobe Bryant has been very vocal in his admiration for Thibodeau. Maybe he’ll win a championship somewhere else, but the bottom line is that he didn’t as the 3rd longest tenured coach in the NBA.

In regards to Hoiberg, he isn’t Tim Floyd (like some lazily want to compare him to). He’s inheriting a team ready to win now. He is familiar with the new generation of NBA players, having recruited, scouted and coached them for the last 5 years. Hoiberg will also have an opportunity to do it in an Eastern Conference that is just being asked to be won…that is if he can do it against LeBron.

Agree or disagree, let’s talk about it on Twitter at @Mike_PiFF03.

One thought on “Chicago Bulls Will Hire Fred Hoiberg, the Anti-Thibodeau”