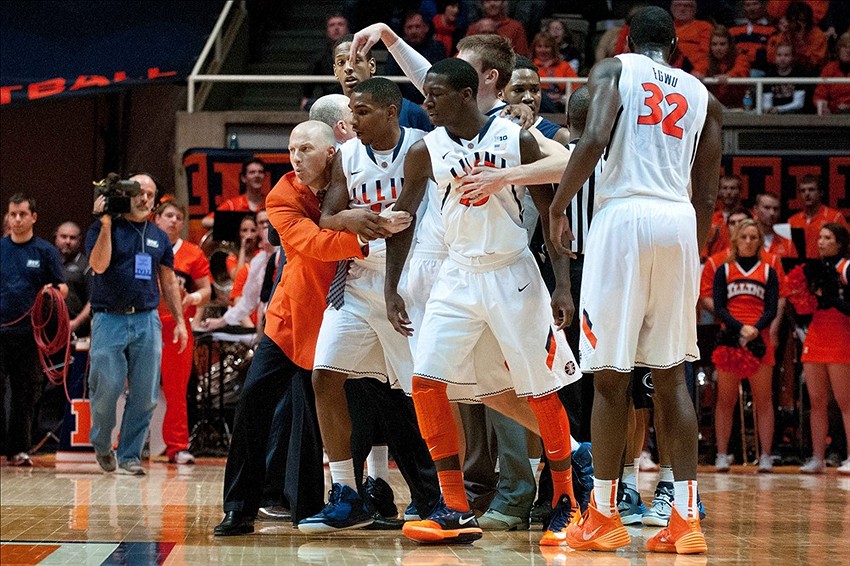 Did you have high expectations for the 2014-15 Fighting Illini?

John Groce did. He had to. He’s the coach.

The team and fan base probably did. And why not? What’s the point of playing or being a fan without some belief?

I did not. While the team didn’t have much turnover from 2013-14 (just graduating Joseph Bertrand and Jon Ekey), they didn’t add much either to a squad that only reached the 2nd round of the NIT. Yes, the roster gained a year of experience, and that showed in Big Ten breakout Malcolm Hill. However it did not show in leading scorer Rayvonte Rice, who found himself suspended from the team following extended time out with a broken left hand.

Would the 2014-15 Illini won more games with Rice on the floor? Probably. Would a handful of extra wins put them in the NCAA tourney? In this year’s Big Ten…certainly. It wasn’t about THIS year for the Illini, though. As difficult as it is for anyone with vested interest in Illini basketball to hear it, success was a luxury rather than a necessity. That is because the incoming class will make or break the Groce era.

Ranked 15th by ESPN, 10th by 247 (CBS), and 16th by Rivals (Yahoo! Sports), the 2015 class will be Illinois’ best recruiting class in years. Having covered 3 of the 4 commits in person, I can tell you the Illini will add scoring and a lot of it. Local Chicago area stars DJ Williams (ranked 63rd in the nation on Rivals) 6’7 from Simeon High School and Aaron Jordan (ranked 83rd) are long and athletic players with range and a knack for attacking the paint. Jordan is more of a jump shooter, passive compared to Williams, but knows how to get to the free throw line when it’s needed. Williams, amazingly, has been able to shine on a Simeon squad full of D1 talent and that bodes well when it comes to meshing with his new Illini teammates.

Jalen Coleman, a 6’3 shooting guard from La Porte, IN (Indianapolis area), is the real catch and not based on his rankings alone. Playing against some of the country’s best in AAU, Coleman proved to be a prolific scorer. He made half of his 92 three-point attempts leading up to the NIKE EYBL Peach Jam Championship tournament in Augusta, South Carolina last summer. He can run the floor when asked to, but has the ability to take over a game by himself…a huge difference when it comes to college basketball.

The Illini will also be adding Darius Paul, who technically was already a member of the team but was suspended for 2014 because of a failed drug test and underage drinking. He is the younger brother of former Illinois star Brandon Paul, a 6’8 power forward from Gurnee, IL, and played this season at Lamar State junior college in Texas. Illinois will need all the size they can get after Nnanna Egwu graduates this year and Paul has the opportunity to contribute in a big way with his 2 years of eligibility.

After missing the year due to injury, senior Tracy Abrams will have another year of eligibility. Abrams tore his ACL last September, but spent the season providing much needed leadership for the team this season, leadership that will hopefully translate to hardwood next Fall. Hill will be depended on to replace the scoring after Rice graduates, much like he did during the injury and suspension.

If Illinois basketball proves they can win with the in-state talent they committed already, the program will become more attractive to recruits in the Chicagoland area. If they win big games on national television, step up in the Big Ten conference, play well in the NCAA tournament, and put players in the NBA, more talent will stay in-state. That’s a lot of “ifs”, but it is plausible. And because it is plausible, that means no excuses in the 2015-16 season…year 4 of the Groce era.