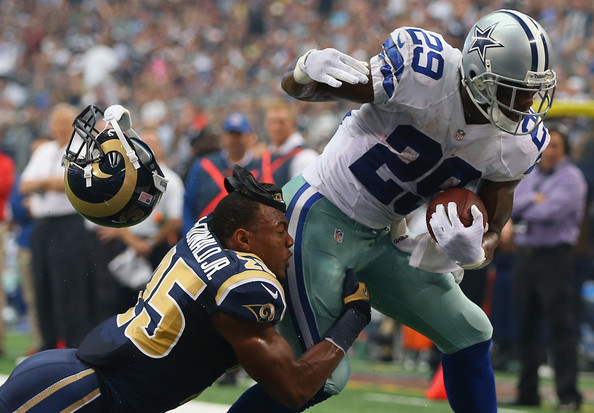 If you had the opportunity to redraft the first round of your Fantasy Football league, what would it look like? Typically you saw the top 5 pre-ranked running backs go in an order similar to this:

How many of these backs have played up to their expectations? McCoy and Forte haven’t been eye-popping but still solid thus far in total productio. The other three, however, have been a serious pain for their owners through three weeks. Charles has seen his numbers go to backup Kniles Davis due to an ankle injury. Lacy has dealt with a bad mix of tough defensive matchups, a Week 1 concussion, and very suspect play-calling in Green Bay. And Peterson…well, you know. So who would you draft in the Top 5, knowing what we do now? I know many of us are envious to miss out on the following:

Going into Week 4, a lot of you are playing “lineup shuffle” with six teams on the bye with some serious point producers being missed from the Bengals, Broncos, and Seahawks. Plenty of time for Lynch to reattach his dreads.

You wondered if Jason Witten was going to get back to being Tony Romo’s most consistent target again, especially with Scott Linehan making the Cowboys passing calls, but that certainly hasn’t been the case. Most of that has been the lack of opportunities in the red zone and a commitment to getting Murray the ball. Witten could have his chances this weekend against a Saints defense who has struggled to get to the quarterback and has to pay more attention to Dez Bryant and Terrence Williams downfield…Antonio Gates laid an egg last week against the Bills, thanks in part to a hamstring injury. Gates has a great opportunity to bounce back big this week against a Jacksonville defense that can’t cover tight ends well at all. Go with Gates this weekend.

RB: Fred Jackson will be your best bet this week, especially against the Texans. Actually could be a solid week for both he and Spiller but in 3 weeks, Jackson is getting a majority of the passing looks and carries around the goal-line. Catching 8 passes last week had to work out well for you if you started Jackson in PPR leagues…Trent Richardson is popping a big run here and there, but I don’t trust him yet and his matchup against the Titans is tougher than Jackson’s.

WR: You knew the Washington wide receivers were going to get a bump in their numbers with Kirk Cousins at the helm, but who envisioned the 80 yard bomb to DeSean Jackson against his old teammates?  Jackson was listed as questionable with the short week, but it looks like he will be active this evening. Keep a close eye on his status to see if there is a change during warm ups…Anquan Boldin will be facing an Eagles pass defense that has given up the second most points to receivers so far this season, but that may benefit Michael Crabtree more. Crabtree is seeing most of the targets from Kaepernick and it wouldn’t shock me if the 49ers go back to their bread and butter of running the ball to keep the possessions limited from Chip Kelly’s offense. Play Jackson but keep an eye on his status before kickoff.

I’ll admit, I was pretty close to the ledge on Eddie Lacy. His fumble for a touchdown early against the Lions seemed to put him in the doghouse with Packers coach Mike McCarthy, and carries in key possessions were going to backup James Starks. I don’t expect that to be the case this week against the Bears, whom Lacy accumulated 213 rush yards against last season. The Bears are also allowing 5 yards per carry to running backs so far this season and will be a bit more on their heals having to defend Aaron Rodgers…As I mentioned a week ago, Shane Vereen doesn’t get the touches you would hope for when the Patriots are leading. Against a Chiefs defense without Eric Berry, that may be the case again. Give Lacy one more chance before quitting on him. If he can’t get it done against the Bears, then well, yeah…

While Fred Jackson is looking more like a solid back for PPR leagues, DeAndre Hopkins is looking even more like the first round pick he was drafted as. Hopkins has either scored or topped 100 yards in each game this season. He and Andre Johnson are also seeing an increase in looks with Arian Foster sitting out and Ryan Fitzpatrick increasing his pass attempts by 50%. The Bills are great against the run but struggling mightily against the pass, so the 2nd leading receiver in catches of 40+ yards may be continuing his run…Terrance Williams has a good matchup this week against the Saints but he isn’t seeing the targets that owners would like. I personally like Hopkins the most out of this group, but Jackson isn’t a bad start either.

Congratulations Kyle, you are the first to ask me to decide between defenses. Funny how these two are playing against each other. Despite their shakiness against the pass, they do stop the run and can get to the quarterback. Fitzpatrick is going to throw a lot with Foster down, and that can be a recipe for some serious interception points. Add CJ Spiller into the mix for Special Teams returner points, and that could be the difference. Go with Buffalo.